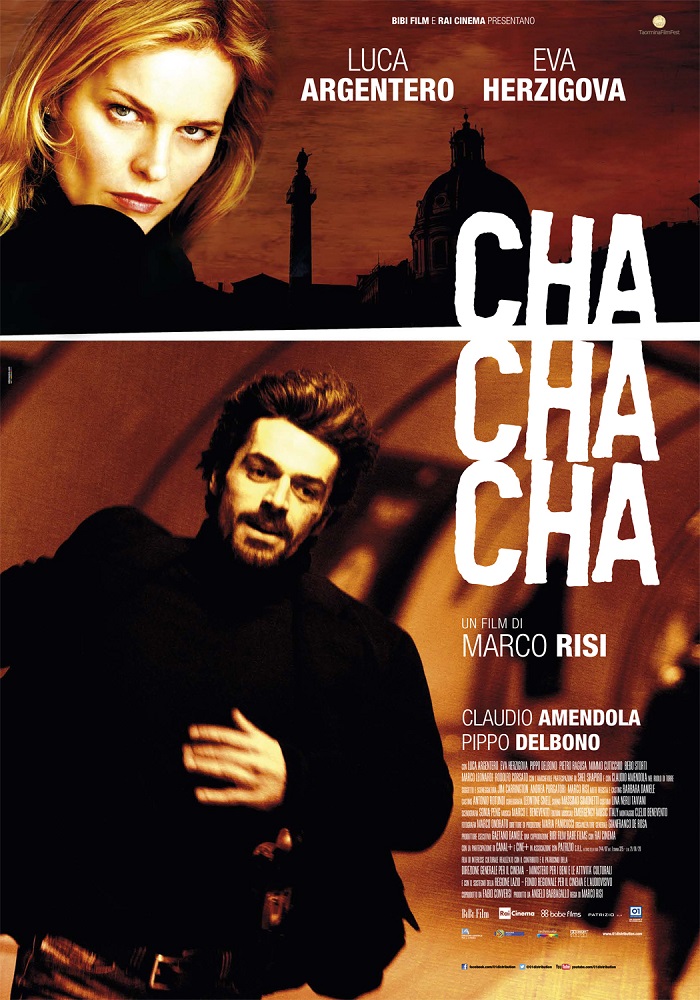 In contrast to the musicality that can’t hear its title, “Cha Cha Cha” is a thriller of a modern intrigue of Italian colour, where corruption and suspicion are the watchwords.

Marco Risi (Fortapasc, The Last Godfather, Maradona, the hand of God, Mery for ever, etc ) sign here a plot rather entertaining. The scenario is based on the characteristics of the episodes of the film noir and, even if the denouement can let oneself guess, the plot remains entirely on the questions of how and why.

From the first scenes, the tone is announced : the wide shots on a corpse in a field or desert, with a few notes of music the distressing on an aerial view of a car, spinning the night through Rome.

The main characters are not slow to appear, and here we are immediately immersed in a polar. Corso (played by the shadowy Luca Argentero), the detective, a loner and former cop we follow the trace, met Michelle (Eva Herzigova), lady-like femme fatale, to talk about the son of this last, Tommaso (Jan Tarnovskiy). We do not delay not to understand that Michelle was once the lover of the Corso, and that the inquiry now to her, to monitor her son.

The decor is planted, we find ourselves in a nightclub very festive where Tommaso has fun, without suspecting that he is chaperoned by detectives who take turns, and therefore, in particular Corso. The young man receives a call, comes out of the box night, starts just his car and the drama occurs : a pile-up violent caused by a 4×4 that cost him his life.

Corso, a witness to the scene, witnessed the death of Tommaso. It is remémorera as soon as the different events which occurred previously, and by convincing the user that it is in no way a banal accident.

For his part, Michelle, as a couple, with Argento (Pippo Delbono), a wealthy lawyer, asks Corso to help find the culprit of the death of his son. Corso discovers via the internet that Tommaso had a revelation to make to his friends, who was going to ” change everything “. This strengthens the belief that Corso had already, which completely confirm when the detective is attacked in his home by three individuals asking them to stop the investigation. Stop request also made by Argento himself.

Corso, thus risking his life, continues to dig to move forward with its investigation, even making appeal to external support services espionnages. We then enter into a world of black where the exchange of information go hand in hand with the various networks, informal or not.

At the level of the stage itself, the decor ensures consistency with the genre of this film : places, desert, warehouses, mansions, spacious and sparkling, or, on the contrary, apartments, glaucous, and of rooms to the moods festive contrasting with the mood of the film. The light worked great, certify that a cohesion with the scenery and the plot, between shadows, lights, and dust.

The soundtrack, meanwhile, is also in line with the scenes throughout the film, suggesting the suspension of some or sublimating the vitality of others.

Characters in the service of a kind

The actors interpret relatively well the characters, the specific characters are the key to the genre of the film.

Incorrompu, sensitive, and patient, Corso is the prototype of the lone hero, ready to risk his life to achieve his aim.

Strong (he fights admirably alone, naked against three) and dedicated to the cause of his former lover without asking anything explicitly in return, he alone is the symbolic of the “good”, the character of which we do not doubt the good faith of its actions. This is reinforced by a physical “young”, which contrasts sharply with other lovers of Michelle : the father of Tommaso ago, and the lawyer Argento in the present action, both older. If the first does not seem disingenuous for a sub, it is quite another case for the second character. Argento is, in fact, even the figure of corruption, he lives in a world where money is at the perpetual service of power.

Michelle, meanwhile, is the perfect image of the femme fatale. Three men, two of which are the antithesis of the moral (Corso et Argento) interact to it in the story. Each of them arises in man protective towards it : the lawyer for the money, the Corso by the trust. It is somehow the pivot of the story, around which each man refers to. Actress in life, she seems to play on the ambiguity of its intentions with Corso.

Tommaso, the only son of Michelle, the centre of the investigation, makes his mother very worried, fear that it reproduces the same mistakes that she made in her past. It represents the innocence… but not that much. Corso very quickly understands that it hides the information that will be crucial to the investigation.

In conclusion, this is an Italy full of networks of all kinds, which we are portraying, a “fucking country” as exclaims the one of the protagonists.

The director Marco Risi said himself in his director’s note that he wanted to “tell a piece of our country (Italy). Without the excesses of moralism”.

Fonts, prosecutors, elders of the BAC and spy service, paparazzi. . all meet, and this is Corso, which serves as the correlation between each world.

On several occasions, Corso swap in a more or less external to the survey: Blackmail, threats, money, and exchanges of information are appointments for advanced research, thus defining this film as a thriller.

The character of Torre (Claudio Amendola), for example, and to mention only one, is not easily identifiable. He is the rival of the Corso, the next State, without reaching so far to determine if he himself is corrupt or not. There is a chased cross standing between the two characters during the progress of the investigation, as they find themselves repeatedly at the same place, at the same time, like a race of which no one can determine the purpose of the first. Which side is it ? Is that Corso may he be proud of ? This reinforces the characteristic of detective lone, the hero of a film noir, not knowing where to lay his trust to resolve its investigation.