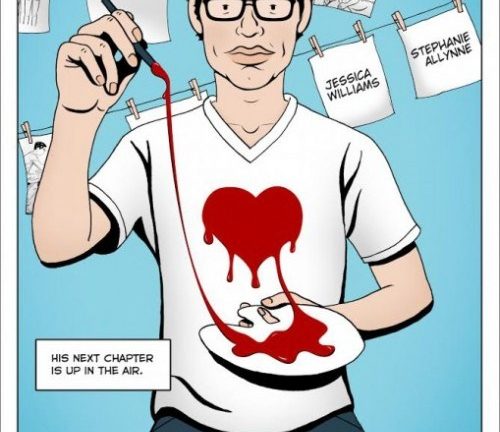 Presented in competition at Sundance last year, it is with pleasure that we find PEOPLE PLACES THINGS in VOD ! Starting from a scenario rather conventional, namely the separation of a couple with children, the director-writer Jim Strouse stands above all the portrait of a man. Empathetic, very understanding, Will is a chic type, which undergoes its life more than it does the selects and practicing many of the avoidance strategy. Loving father of his two little twin daughters of 6 years, he left his wife to leave him. Such a ball of a pinball machine, Will is quite often at the side of his pumps, let themselves be carried by the events, without expressing his emotions, sadness or anger. He never really learned, does not possess the codes of the communication between human beings because the mode of expression, a favorite of Will’s, it is the design, its refuge. In life, as in the boxes of his comic book, the graphic designer is stuck. It is the best ingredient of the mise en scene of the original filmmaker, since the images of PEOPLE PLACES THINGS are systematically reinforced by the drawings in a very realistic american graphic designer Gray Williams. They are quite often at odds with what he gives us to see the screen, with a comic effect rather clever. And Will he self-portraits, moments of his life and draws his adventures, real or fantasy, its frustrations, its obsessions and its loneliness. His interpreter, Jemaine Clement, best known for his comic role in the series Flight of the Conchords, plays perfectly nonchalance, with a phrasing and a sense of humor shifted.

So touching, at the option of walks in the city of New York, swaying to the sweet music and joyous, the director also leads the viewer to reflect. The air of nothing, he hands her the pole to initiate a debate on the sustainability of the happiness on the couple and their evolution in time, on the place of the woman in the couple, the benevolence between spouses. Giving us to see a divorce certainly idyllic between Will and his wife Charlie (Stephanie Allynne) without cri, and a smooth, non-adversarial, it encourages us to think of a different way to manage the relationship between respectful persons, who continue to worry about one another. It evokes the life after the divorce, the acceptance of the end of a relationship and the right time to turn the page of past history, in order to be able to live another. Will opens his eyes and walks gently in other places, to other people, by having “dates” – which are not dating, as in France, but an in-between.

“PEOPLE PLACES THINGS is a real feel good movie, that envelops us in a cocoon of kindness and humor, rejoicing!”

The French title PEOPLE PLACES THINGS going unfortunately in addition to the obsessions (“Things“) that Will was supposed to turn and is reduced to the place that Will is going to take, by choosing his destiny. His meeting with Diane (Regina Hall), a professor of literature and mother of his student, Kat, give him back the urge to build a new relationship and last to express his emotions and learn to say no. The director uses his film to convey some messages : he gently pokes fun at those american parents who, under the pretext of open-mindedness and culture to the utmost, stick to their children too many courses to take (French, cello, etc.). It also offers the viewer the opportunity to live like a student following the course of Will. He not only teaches the viewer how to make a graphic novel, as well as some of the effects of the relationship of the drawing and the word and the shifts that followed, but he re-established the role and importance of the american comics in american literature.

Fresh, funny and charming, PEOPLE PLACES THINGS is a real feel good movie, that envelops us in a cocoon of kindness, caring and humor delightful !

• Synopsis : Will Henry is a novelist and graphic designer freshly single who juggles between her two twins and her class of students while exploring the complexities of new love and letting go-taking with the woman who left him.
TRAILER