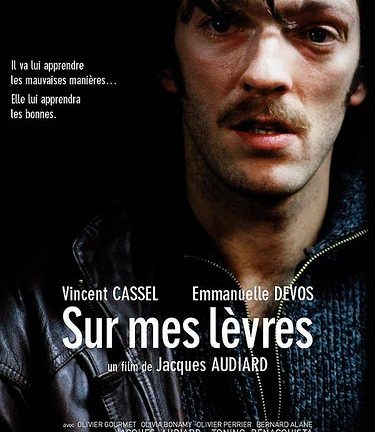 Carla Bhem, a young woman of 35 years at a physical rather average and who wears hearing aids, is the secretary to the Sédim, a real estate agency, but it is paid a misery and suffers from a lack of consideration on the part of his employers. Her existence sad and lonely is going to take a different turn with the arrival in the company of Paul Angéli, a new recruit, 25 years old, rather handsome, but who has no expertise in real estate development. It seeks to reintegrate after prison. A story of impossible love, a-lined handling reciprocal, is going to be born between these two marginal.

On my lips – trailer EN

Two weeks exactly before the release of the new Audiard, A Prophet, the opportunity for us to come back on one of the major works of the filmmaker who, in only five films on our screens, has established itself as one of the major figures of French cinema, a cinema of intimate recognizable between thousand.

For this tribute, I have decided to tell you about my vision On My Lips, a film that this craftsman of the cinema has taken five years to finalize in which it puts in scene Vincent Cassel and Emmanuelle Devos, film, flagship of the years 2000 that harvest not less than nine nominations for the César and won those of best screenplay and best actress for Emmanuelle Devos.

To describe Jacques Audiard as simply as possible, we will say thatAudiard is above all an eye, and what eye ! The director has been provided with a very good body sculpting a universe utterly unique, a humanity without a flaw.

On My Lips is no exception to this observation since it is a film of devastating power, who is the Man in the foreground : here, the Man is at the centre of the goal, Man in his most simple device and yet so complex, the Man who is scrutinized in minute detail, where the camera is the watchful eye of the surgeon who captures the smallest parcels of her emotions, good or bad, beneficial or devastating, with the help of framing very tight, a solidity to any test.

The history of these two being skinned alive, of these two Bonnie And Clyde of the lower districts to which life has not made gifts and relate to the slightest bit of hope is subject to a profusion of feelings, deep, powerful, désarmantes. And this hope, this happiness is inconceivable for years, eventually they will find it together. Because On My Lips is first of all a pure exercise of style which advocates a hymn to impossible love of two young people, a release from prison, and who clings to the slightest thinning and the other, a secretary, uncomfortable in his skin waiting on for a long time, too long, something out of this monotony is deadly.

Through these two characters, we discover with amazement the two actors : Vincent Cassel, as we knew very good and varied in his roles, but especially Emmanuelle Devos, dazzling talent, beautiful sadness, beautiful despair. The actress is required with this role as an actress of “weight” in a world that is very male, macho to perfection, as the only Audiard arrives at us transcribe them.

On My Lips is a black film with sensitivity, mood, sustained until the very last second, which explores the human being in its smallest details, the confrontation with what is most wrong and most beautiful in him, in each one of us.

It is conquered, captivated, moved by the simplicity and sincerity of such a film. On My Lips is what the cinema can give, the purest, combining the intelligence of the profession to that of the heart, a simple movie, a genuine drunk greedily awaiting his next masterpiece : A Prophet.

Appointment on the 26th of August…