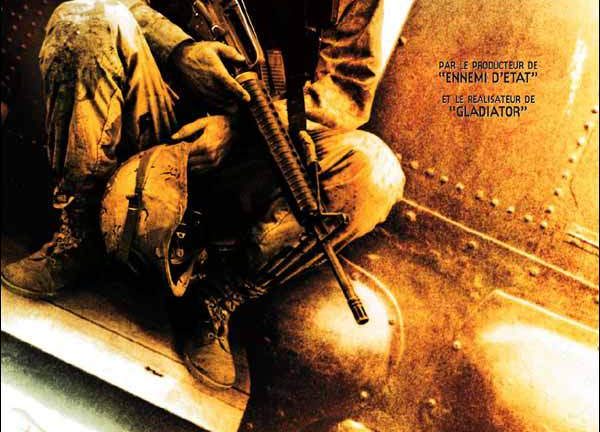 Hasard calendar, came out three months after the destruction of the two towers, Black Hawk Down.

The film in which America needed to feel good to the ego… An ego bruised by the murder of thousands of innocent – just as the discovery of relatively sudden hatred without a face dedicated to american values.

Black Hawk Down does in spite of himself, an amalgam between the war conducted against islamist terrorism, and the conflict independent in which the u.s. army participated in the 1993 – a conflict the complexity of which is impossible to summarize in a few lines (and even less addressed in the film) ; you will return to this in the wiki page dedicated to the conflict.

The film is the story of a military intervention having failed, in spite of the courage and determination of a few men. A film is very important, for the message of both ambiguous and clear, that he gave to a people in need of answers :

Clear, in his way of invoking the need of the commitment, for a cause greater than self : the defense of american values. Ambiguous in its representation of the enemy, which is applicable to any movement religious or political, by its nature dehumanized.

Because the enemy, in Black Hawk Down is without a face. It is that movement, and hatred. And he is killed by hundreds, by a few brave Marines. A feeling of power is transferred on these few super-soldiers, despite their tragic end. This super-soldier, it’s all-the-world and person at the time : the rookie with no personality, the hothead, the fearful ; an experienced soldier at that, moved by “the atrocity of this war”… The gallery of characters – very ultimate, allows everyone to identify with a heroism that applies to everyone, regardless of his past, his origins, his state of mind.

The work of Ridley Scott places himself as the object of propaganda for the justification of a conflict, continues to this day.

Cinema, no film was able to reproduce the kind of artistic perfection that is Black Hawk Down.

However, the film begat a progeny relationship which transcended its original material by interactivity : the series of video games Call Of Duty (Modern Warfare and suites). Video games taking up with an unwavering confidence with the concepts proposed by Black Hawk Down : Mise-en-scene is sensational and spectacular substituting any realism to the valuation of the super-soldier ; blur intentionally kept on the ins and outcomes of the conflicts ; dehumanization of the opponent, etc?

In both cases, an image of the war obviously biased, as issued from a point of view exclusively spectacular, no human/psychological, never political.

Exactly the claims inverses of films that are of interest to us in this year 2015, American Sniper , and Good Kill.

In 2001, young men vingtenaires, impressionable and impressed by some of the speechs and images are highly spectacular, touting the commitment to the defense of american values…

In 2015, traumatized indélébilement by a war in which they are just beginning to look for the meaning, in view of the absence of results or impact of the american intervention.

A critical outcome of the article dedicated to the influence of the September 11, 2001 on american cinema.