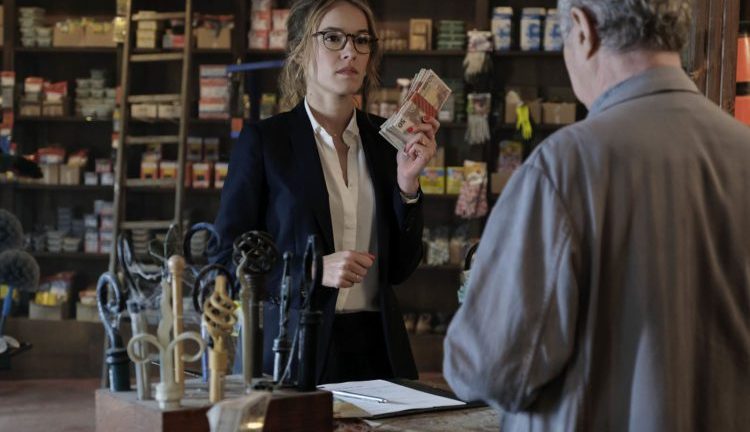 After the success of The Ascension came out this year and awarded the Grand Prize and the Jury Prize at the Festival of the Alpe D’huez, Ludovic Bernard connects with a second comedy, more romantic and less inspired : the MISSION of the BASQUE COUNTRY.

In contrast to The Ascent, this time it is not him but Michel Delgado , and Eric Heumann, who co-wrote the screenplay, and it is probably this that makes the difference. If we find the common theme of the protagonist getting out of his small comfort to confront a universe that is totally foreign, it regrets the lack of credibility total scenario and the huge strings which make for the least predictable.

Sybille (Elodie Fontan), paris as nice as it is ambitious, wants a family hardware business in the Basque Country for the purpose of installing a mini-market of large grocery retailer where she works. Ready to do anything to achieve its ends, it will have to convince Ramon, the nephew of the owner (Florent Peyre) who has no intention to let it go in spite of the inclination immediate that it feels for the young woman… how will the relationship between these two is not difficult to guess, but it was hoped that the path that will lead would not be the only one axis worked. With regard to the title of the film and like a Bienvenue chez les Chtis by example, we expected to discover the Basque Country and fall under the charm of the region as well as its inhabitants. Of course, there’s the competition of the cries of the shepherds and the manufacture of the sneakers but it is regrettable that these details only exist to liven up the thread of the romance. The Basque country is present as a setting, as pleasant as it is, but to be the source of an excuse plot, it does not guess the slightest ambition to share with the audience the love of a region. The landscapes add to the aesthetics of the MISSION of the BASQUE COUNTRY , but the anecdotes about the inhabitants leave a bit dubious…Luis Mariano would it be representative of the musical culture of the basque ?

“The MISSION of the BASQUE COUNTRY rest-a-kind romantic comedy which, far from marking the record, will have the merit to entertain the spectators during 1h40 “

Yet it would well be seduced by a casting which has proved its worth and put your heart at work, but the background is lacking : there is rhythm and a little bit of action but a storyline that rings hollow outside of this love story sewn with white thread. In fact, Elodie Fontan, up here subscribe to the cardboard of the box office (That is what we did to God ? , Babysitting 1 & 2), holds his first major role, vigorously, almost as light as endearing, but it won’t be enough to mark the spirits. Not more than the friendly service of his partner Florent Peyre (also in his first major role). The smile of the latter may be disarming, and her uncle (Daniel Prevost) rather amusing in a role of old man in mid gâteux – mid vicious, nothing happens, the cursor is never pushed far enough to create a spring that is frankly comical or more deep.There was, however, matter to develop the current topics, more interesting and less popular processed watermark in the MISSION of the BASQUE COUNTRY. For example, the film begins in us plunging snackin ‘ in the world of the great distribution, of all, and especially of the methods unscrupulous employed by the senior graduates in the sector to develop the networks. Unfortunately, this theme quickly gives way to a history of arms trafficking is totally fantastic ! By extension, this film also deals with the tussle that is played with arms unequal in many regions and tend to replace the local shops and artisans who make their identity and their history by supermarkets standardized. A pity that for all this to be over hit shots…

But whatever, the MISSION of the BASQUE COUNTRY remains a nice romantic comedy, fresh and summery, which, far from marking the record, will have the merit to entertain the spectators during 1h40. It encourages all the same Ludovic Bernard to continue writing the screenplays for the films he directed, because, obviously, he managed more…