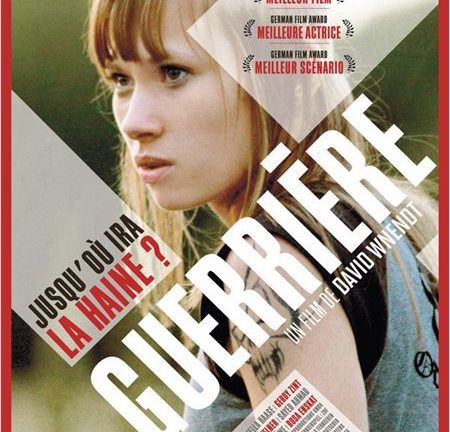 Marisa, a 20-year-old, part of a gang of neo-nazis in the north of Germany. Tattooed in swastikas, shaved heads, she hates foreigners, jews, blacks and cops, to its eyes, all guilty of the decline of his country and the mediocrity of his existence. Manifestations of hatred, violence and binge drinking and give rhythm to his daily life, until the arrival in town of an afghan refugee and burst into his gang to a 14-year-old. These new entrants are a threat to the fanaticism of Marisa…

When I said ” nazism “, first time, every time, I think in the eyes of Edward Norton in shorts and marcel when he is arrested by the police in AMERICAN HISTORY X. Yeah, the uniforms, the stripes on the side, the planes that make noise, whiskers or other spend (shamefully) in the second plan. Professional deformation ? If only. Because unfortunately, being a film critic is not my job (yeah I know I you give you my perch here). So I’ll just say that I’m a jerk.

Presentations being made, pass to the movie if you want though. And just to put things clear. Yes, the film is in German. And no, this is not a negative point. Because the German, you may say, it is very nice. It sounds just right. This is sweet. It melts in the ear. It caresses the ear drum.

But we must recognize the chance that we have to have this film in German. In fact, if he had been treated by a different country, a noticeable loss of the true character from the film would have surely produced. Because one of the strengths of the film is to stay true all along. No grandiloquence or action demented. No. The film stays in place and offers just a vision and just enough of the everyday life of a young girl neo-nazi. The camera is only there to follow the progress of his life. In any simplicity. Looks almost like a documentary so.

The implementation is indeed simple, fluid, while being personal. I said that the camera was only for purposes of illustration (and because without a camera, also, we made no movie, duh !) but a fine point of customization is to denote. For example, the scene of the motorcycle accident is a proof of the simplicity rich atmosphere of the staging. Between the shots and the play on the sounds and music, we have here a proof of the ability to make real an event.

This is a film original and unique in its realization, but it is common and expected in his remarks.

The finesse of the realization can also be found with many details. In particular, by the fact that a lot of elements that make up the daily life of this youth which are revealed only by these small details. Nothing rude, no explanation, forced. It will be noticed here and there, in public, a dressing to hide the tattoos the nazis, or the presence of a “spiritual guide” older at meetings/parties, or even, in conversation, the implication of crime on a large scale.

But the big point of the film lies in the presentation of the youth neo-nazi. And this thanks to its two heroines. Two different girls who, in reality, are only one. One, at the end of his involvement in the movement, and the other, which begins to return there. Thus we see the mindset and the experience to two different periods. The youth, the recklessness of the early days and the challenge that arrives years later. The film therefore allows us to see the two behaviours, two opinions, two developments within the same ideological faction. A year very pleasant and rather clever.

What can be criticized, however, will be the reversal of the situation in the older. Well-known and well-worn, the film would have gained in power and realism brute if he had not paid into the pseudo-happy-end. But be careful, we’re not in the happy-end eh ! Quite the contrary ! It’s just that, like in AMERICAN HISTORY X, the side I switch to the other side ” is a little too expected, simple and quick.

In summary, one is therefore faced with a film original and unique in its realization, but it is common and expected in his remarks. The balance is having said that very good and the dose of the salty-sweet is perfectly adjusted and, in the end, worthwhile. This is not a great film, but it does not pretend to be an. So it is very nice and it goes quite well. Me, I’ve watched it on a Sunday afternoon. It was good. Here it is.

• Deaf and hard of hearing : None

– Interview with the director

Good. For the DVD, we will be short. Well as supplements offered.

The DVD itself is nice and neat. The quality of the sound and the image are very good. There is nothing to say the above. The sound is well worked, and allows for some scenes to create authentic atmospheres rather well thought of elsewhere.

What disappoints, most importantly, it is the content, rather poor, of the bonus game. A small interview (about ten minutes) and a making-of fast that is only there to give a little volume to the part supplement. The bare minimum what. Nice and basic, certainly, but it is little. It is true that over the top, I praised a film’s minimalist and simple, and there I mouth because the supplements are to this image. But hey, that is what you want ? As I also said earlier, I am a con !