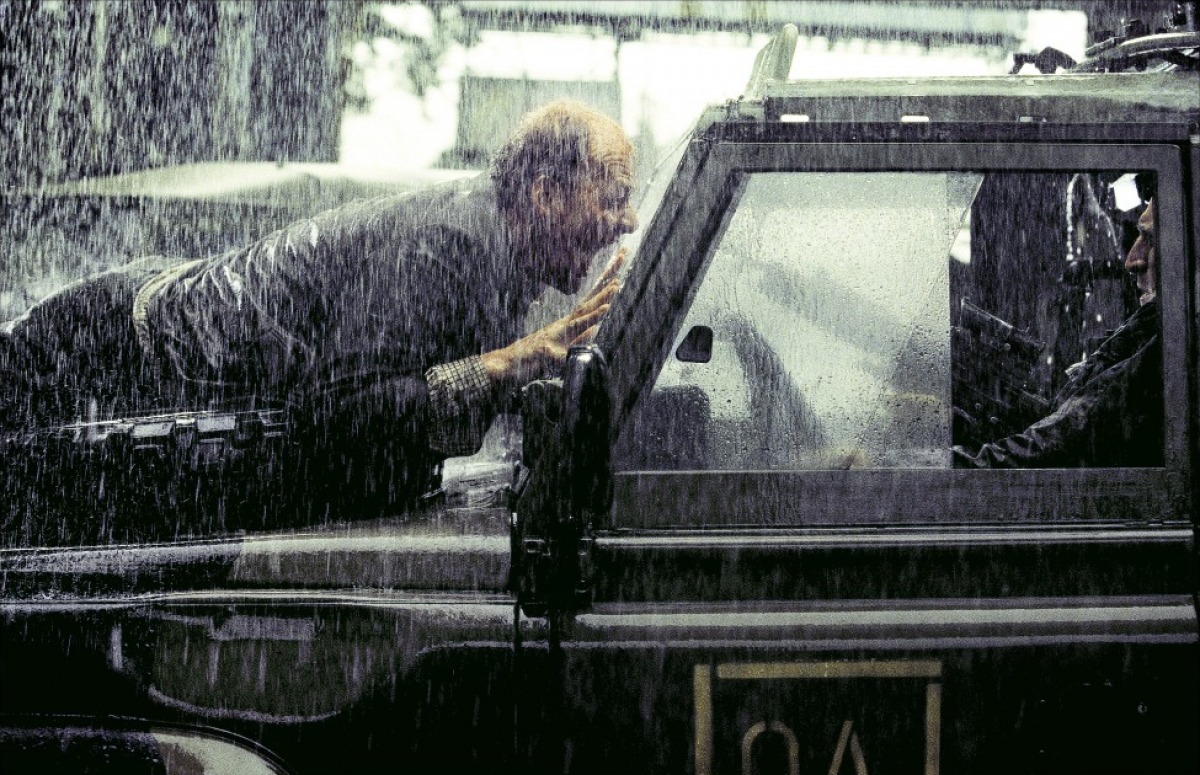 Here is the 5th movie of Danny Boyle, 28 days later, always analyzed by our Squizzz !

Boyle decides this time bravely tackle a genre film and, more particularly, that of the Zombie. Choice not that easy because the theme is often kitsch and was somewhat old-fashioned for at least the time of the film.

Despite the rather lukewarm reaction to ” The Beach “, Danny Boyle turns back to Alex Garland for his feature-length film next. This time, the writer a sign for the director, an original screenplay, and their duo will finally meet a critical success and public, even if it is targeted. Boyle and Garland turns, in fact, this time to the horror cinema and will lay the foundations of the zombies movie modern. However “28 days later” cannot be considered stricto sensu as a movie of the undead, and especially will be the opportunity for both authors to dissect human behavior.

Zombie or not zombie ?

The introduction sequence appears to impose a zombie film. It shows that a virus of ” rage “, the transmission of which is done by the blood and the saliva, will transform a human into a being that looks exactly like a zombie. The eyes injected of blood, she becomes more aggressive toward his fellow men. In a broader sense, we find the aspect of gore’s film, undead, but also its social and political (as in Romero), which appears here with the first plans on the urban riots.

Yet it will be later than “28 days later” only has the appearance of a zombie film. Those we’ll call “contaminated” aspect of zombies but are not. They remain human (gifted with speech, as evidenced by the scene with the little boy), but are no longer able to meet their needs, and are animated by the rage. They are not dead and do not eat humans, since they eventually die of hunger. They also lose the characteristic slow march of the zombies, which is more than suggested by movements erratic and jerky by a decrease in the number of frames per second. On the contrary, the “contaminated” are very vocal, which contrasts with the codes of the genre until the release of the film.

On the other hand, Boyle gives a more realistic side of fantastic in his film. The use of DV gives it an aspect of documentary. The attacks of zombies are not the focal point of the film, they appear almost the same anecdotal evidence during any part of the movie. Evidenced by the contamination of Franck who does not even during an attack (the cause actually evoked by Danny Boyle is looking for a more emotional intensity to this point in the film). It is more the climate apocalyptic will here are important, and the impact it will have on the survivors.

However, Boyle and Garland do not hesitate to offer a few moments worthy of the genre. It should be noted that the references to Romero, scenes much bloody, and the sequence of parody of the puncture in the tunnel.

“28 days later…” and it is the stark contrast with the introduction sequence. Flat calm, not a noise, not a music, blinding light. Very close up on an eye that is awake and then on a naked man in a hospital bed. This nudity made him very vulnerable, and also shows a sort of return to something primary. The camera is not really subjective but it is just as, and it is understandable that the character doesn’t know any more than we do and that we will discover with him what happened during the famous 28 days.

The discovery begins with the exploration of a hospital empty, a place which is usually always on the move, before continuing in a London completely deserted. Boyle multiplying the overall plans, and general plans, some of them through, which creates a real climate of apocalyptic and reflects a world upside down. The fact that the sequence to be rotated in a full day and the absence of music at the beginning, increases even more the impact on the viewer. The use of the DV, if it has an artistic side as mentioned above, has also been chosen for its practical side which could rotate rapidly and in multi-camera for not too block the streets of the capital.

The feeling that everything stopped going through the details playwriting. The means of communication are cut off (see the plan of the phone shattered), the fresh food is out of date (people are back to the distributors), the money no longer has value (the tickets blow around in the middle of the street, and later on in the movie a character gives up his CB).

The first link that Jim will have with humans, to understand what happened, is indirect and is made through a wall where many people have come to drop messages. This sequence actually refers to an earthquake in Beijing where lines of communications were cut, and where people spoke to each other by this means. The film has several references of this kind, which gives it a very realistic. Here the fact that humanity appears in all its splendor, but indirectly gives a dramatic intensity very high.

The sequence ends quite logically in a church, a sign that the Men, feeling threatened, turn to the divine. A church, moreover, transformed here into a kind of tomb is huge, where are piled up the bodies (a scene which actually took place in Rwanda this time). However, it is in this same church that Jim will for the first time be confronted with a contaminated, which is no other than a priest. This irony puts in question the help of God, by giving the virus a character demonic.

The film will then take a character much more intimate, and focus on the human characters in between two reactions of survival in the face of such a phenomenon.

The first, very rigid and individualistic, is to follow very strict rules clearly established. She is represented by the character of Selena, who place the search for survival above all other things, including the emotion and feelings. It will not be to kill the one that had been presented just before as a friend by several intimate scenes. This sequence has another role, which is crucial, one to show that anything can happen, in the death of a character that you would expect to follow any longer, his past has been mentioned in the previous sequence.

This way of seeing is quite difficult to accept for Jim, who had just plunged into the horror, and is unable to detach emotionally (even if it will subsequently killing a child). The sequence that opens clear eyes with Jim, and at the same time reveal to the spectators, is that of the childhood home. Boyle exacerbates while the nostalgic side of the memory, through a yellow light (sepia photo), a passage in Super 8 or the photo of Jim child on the bodies of his parents. The film then takes a sharp turn for the more emotional hitherto absent but necessary for the identification with the character.

This sequence also announces result, to know the constitution of a new family with which will appear as the second way to see survival, reforming social ties and the emotional, without which life is ultimately more life. The meeting with Franck and his daughter directs from the beginning to this evolution, by responding to the sequence of the childhood home. The light is again yellow, and gives the apartment an aspect of cocoon, reassuring, in the midst of the darkness outside. The garland electric Christmas, family celebration par excellence, only serves to amplify this idea.

Their links will actually seal during a particular sequence in the film, the picnic in nature, which rings at the time as a new hope, and vice versa, as a nostalgia of a time gone by. It is one of the first scenes that takes place outside of the city. The photography is very bright, almost dream-like, divine. The presence of the ruins evokes a possibility to survive at a time and testing, but back also to something more primary, as if the Man had been too far away and would be forced to backtrack. Horses in the wild (qualified family by Franck) reflect the same ideas, the ones hope because they do not appear contaminated, but at the same time that nature is taking over the top.

The last part of the movie is going to integrate yet another way to see things. One of the major West and its military is more pragmatic and is only intended to rebuild the humanity in a way more animal, without the intervention of feelings. The film then flips into the psychological horror, that Boyle translated to the screen by a strong, physical violence and visual.

From the beginning of this part, the director sets up a mood quite disturbing, in what should normally be the place where the ordeal ends. The delicacy and the femininity of the british house are offset by the ubiquity of barbed wire and weapons of any kind. The meal as a “socialite” is going to be doubly disturbed, first by a violent discussion, and then by violence purely physical, which responds directly to the discussion. Boyle sign then a sequence straight out of a war film. The scene in prison, and then the slaughter of the prisoners in the forest (based on an event occurring in Bosnia), amplifies this side of war film.

Another event that is going to disrupt the film, a real hope, which appears in the sequence of the prison, and an amazing mastery. A pull back starts on the corner of the room that seems to offer no way out, and then pass by Jim to gradually reveal the size of the room and the presence of the other prisoner, whose speech, more and more net, referred to the theory of the simple quarantine of Great Britain. If the revelation is made, ironically, in prison, when he was able to escape that Jim will be able to realize its hope of seeing the plane in the sky.

The film then flips completely. The enemy has changed, the rain has replaced the drought, the contaminated become allies, and Jim himself, animated by a rage to live, is filmed as a contaminated. Boyle launches into a sequence of absolutely monumental chaos, where everything goes extremely fast, but where the details are in fact legion, and appear as new screenings of the film.

… and everything can be relieved in as much time as it took for everything to go crazy.

The end of the film was shot in 35 mm, giving it an atmosphere much more peaceful. The awakening of Jim, in response to the beginning, would almost pass it for a bad dream during his coma. The cottage has a side reassuring, as the return (mentioned earlier) to a more peaceful life, more simple, as opposed to the images of the riots that open the film, to this humanity which short his loss.