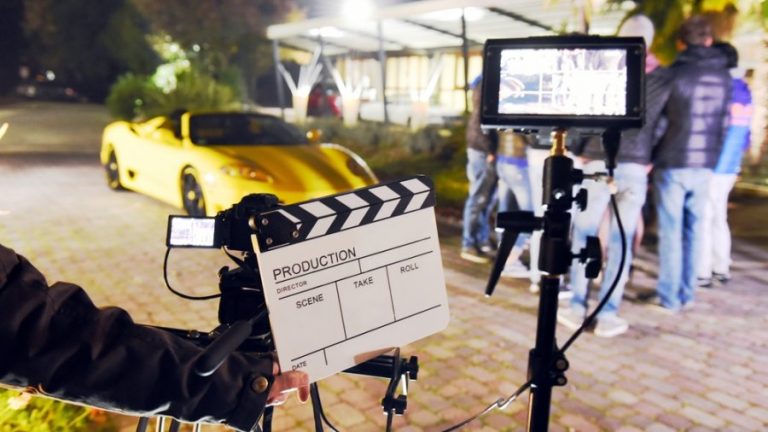 make a short film the following….

This week, I want to highlight all stages of the manufacturing of a project. The film that we are going to study at a duration of 5 minutes 32 seconds, including the credits. It has been produced in an association in 2004 , thanks to private and public funds (regions, etc…). You can also find all the aids that are closest to you for your projects of films by going in the tab : Items.

The project, which is called ” The phalanx of Stone “ was shot in super 16 inflated in 35mm for festival screenings and has a budget of 10000 euros.

Once again, I think this short film is not the best you can find. But I do not judge neither the kind nor the quality story. What interests me is the work that has been achieved and show you the different stages : synopsis, scenario, script breakdown, storyboards, and finally the film.

Beside the altar is a paschal candle is lit. A statue of an angel watches over the faithful.The place is virtually empty. Only a young woman is sitting. She prays to.Suddenly the double entrance door opens, the light springs up, a man enters and goes up the central aisle towards the altar.

Disturbed, the young woman gets up and leaves.

Once arrived in front of the altar, the man opens his arms and falls to his knees. He prostrates himself.

Forgive me my God for I have sinned. What I have done, you know. Is it that I still have to repeat it ?…If even with all this I could cry…

He tries to force himself to cry. His face contorts itself, his eyes pucker. But no tear comes.

The flame of the paschal candle flickers and turns off.

A dove perched on a statue of the Virgin flies.

The man is surprised, stands up and looks at the bird, and then prostrate again.

The ground begins to shake, the joints of the tiles jump.

The man stands up, the ground is shaking, he struggled to stand up.

A light invades the church. It sheds light on every stained glass window and the tower of the church and then suddenly disappears.

All becomes calm again. The man is in the middle of the church, alone.

The flame of the candle relight as if by magic.

All is quiet, the man approached the altar, when suddenly, the statue begins to move one hand and then the other.

The man kneels at the foot of the angel.

The angel leans to the fisherman, he lift up the head. The man is ready to make amends but once the angel has put the head of the man in the right position, it’s the slap in the face.

The man is recovering, he touches the cheek, disgusted.

He gets up, goes up the central aisle. Before going out and closing the door he looks one last time behind him, and fate.

The angel resumed his position, and in the church, everything becomes quiet.

The cutting technique is the translation into plans of sequences of your scenario. It is at this time that you choose your axes, size of plans and your movements. To make a movie you’re going to have to master this technique, and vocabulary. All the images that you have in your head for months is beginning to take shape here.

Plan 1 : close-up on the paschal candle with angel field background + moving crane, the bottom-up and pan left-right to finish off in very large fixed field of the empty church.

Plan 2 : Travelling left-right on panther end on the door with dove

Plan 6 : total immersion (shower) + pano low-high on the man who enters and goes up the central aisle towards the altar

Plan 7 : Dolly side-Left-right (primers chairs) on the feet of the man

Plan 8 : Plan fixed on a statue. A dove lands on the head of the statue

Plan 9 : plan walk ¾ back, the man kneels before the altar

Plan 12 : a close fixed profile of the man who cries

Plan 13A – 13B : close-paschal candle. The flame flickers and turns off

Plan 15 : Gp hand diving total (shower) on the hands on the floor. The ground starts shaking.

Plan 17 : plan with very wide on crane slight dive, the man gets up with difficulty because the ground is shaking more and more.

Plan 18 (continued p11) : the man finishes up, a light pervades the church

Plan 21 (continued p19c) : The light moves from right to left

Plan 23 : Pano left-right on the light that passes from a stained glass window to the other

Plan 24 : diving tight on shadow of a statue that moves

Plan 27 : pano Left-Right light stops and restarts in the opposite direction, arrived at the central stained-glass window the light will disappear.

Plan 28 : starting light plongéé wide and Pano left-right + moving crane up-down : man finds himself in the middle of the church, everything is back to normal, the flame of the paschal candle lights

Plan 29 : lightweight dolly ¾ back, the man approached the altar and the angel

Plan 30 : circular traveling in close up on the face of the angel. The angel opens his eyes at the end of the movement

Plan 33 : fitting in the axis. Plan fixed close up of the face of the man, always profile. The angel caressing the cheek of the man and reports to the head

Plan 37 : pano chest – ¾ front left-right. The man touches the cheek and heads towards the front door.

Plan 38 : pano circular right-to-left close-up of the face of the statue. She smiles at the end of movement

Plan 39 : very wide light diving field church. Then motion crane up-down and pan left and right to finish on the paschal candle and the angel in the background

Once your shooting script is done, it is sometimes best to make a storyboard. Why ? Simply because a film with a lot of moves in application installation time, but also because of something you have in mind and what is possible technically to do or interesting artistically, there are sometimes surprises. As many anticipate. In addition, a storyboard is there to materialize your thoughts into a pattern so that all your team works in the same direction. You need to make a movie (your movie )know articulate/ explain what you have in mind.

ATTENTION : a storyboard must adhere to strict rules (as we will see in the next section). So that it is understandable by all, but also for it to be good technically in the values, the movements , the axes, so you don’t have too many surprises during the filming. Otherwise, the story board is not used for nothing.

The storyboard that follows has been done by a storyboard pro : Merry Viersac

After all of these steps so here is the finished product, the short film : ” The Knuckles of stone.”

I find it interesting the work that has been done on this project. It must be remembered that it is an associative project. But the research of funds, partners, service providers have been made in a very professional manner. The team was composed of experienced professionals, but also of young people in intermittent , or close to becoming so.

It is important to highlight the differences that exist between the script breakdown, the storyboards and the finished film. Of course, the major part of the plans has been respected, but the locations, the special effects, the technique or the time did not adhere strictly to the storyboard. Another reason (the most valid I think) is : a change of mind of the director. In fact, a movie is in perpetual change, it must never be forgotten…