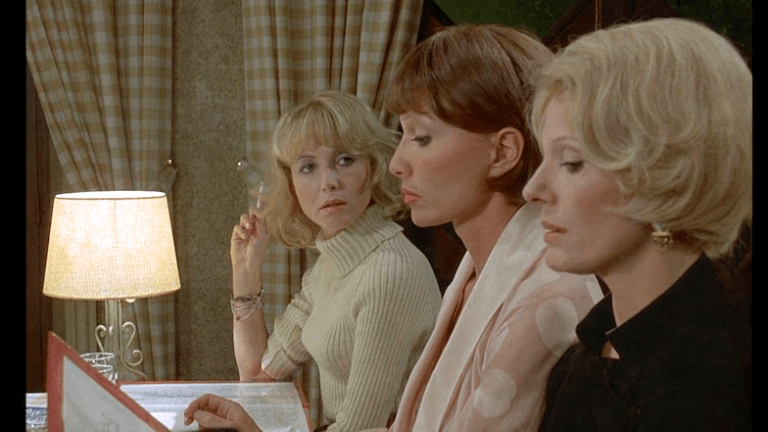 That the Parisians, who do not take vacation in rejoice ! From the August 2, spring rooms, four major films of Luis Buñuel in the restored version, including the discreet Charm of the bourgeoisie (1972).

The ambassador of the Republic of Miranda (Fernando Rey), with Thévenot (Paul Frankeur), his wife, and his beautiful sister (Delphine Seyrig and Bulle Ogier) go to the Seneschal. They are greeted by Stéphane Audran (sublime) that does the waiting for the next day. Together, they decide to go to dinner in a hostel not far away. But upon arriving, they discover an inn empty where rests the patron, abruptly died. The DISCREET CHARM OF THE BOURGEOISIE, like other films of Buñuel, is quite difficult to summarize. The plot (if there is one) is centered around six characters, townspeople, who try in vain to eat together, but are disturbed by an event, a dream or a character like so many digressions and narrative.

Co-written with his faithful collaborator Jean-Claude Carrière, the DISCREET CHARM OF THE BOURGEOISIE was inspired to Buñuel by his producer, who had invited a group of friends and that, failing this invitation, was away from home, leaving his wife to improvise the dinner failed. If we can’t reduce this movie to a film surrealist (surrealism, of which we have too often taxed Buñuel , which marked his directorial debut with The andalusian dog , co-directed with Salvador Dali), the film nevertheless remains dream-like and follows the same narrative thread as a dream, jumping from one story to another, making it appear and then disappear characters and featuring dreams, or memories in the midst of these meals aborted.

In drawing the portrait of the bourgeoisie, between decadence and conformism around skits, both funny, comedic and dramatic, Buñuel finally proof of naturalism as outlined by Gilles Deleuze in his essay The image movement. The naturalism of Buñuel translates into an exaggerated realism, which allows him to emphasize the impulses of his characters and describe what Deleuze calls their “worlds originate”. So when the characters always supposed to have lunch together are seated on a theatre stage in front of an audience that waits for their replies and that ends up whistling, the characters fall through this nightmare in the quintessence of their world as a prisoner of a social code, an etiquette and a hypocrisy blatant (the three men are, in fact, cocaine traffickers). By placing them on a theatre stage, Buñuel returns to the emptiness of their environment dummy, and allows them to be free. They are representation in front of an audience acquired and are forced to flee. Similarly, when the bishop Dufour is present in the Seneschal dressed in gardener to take the vacant position, the Sheriff, the return on-the-field. He returns dressed as a bishop and the excuse of not having believed. The habit makes the monk in the middle.

Several characters have changed the story of the events missed as this lieutenant who is invited to the table of three women in a tea room which serves neither tea nor coffee, and tells them how he has poisoned his father before leaving. Or a colonel, followed his battalion into full training (drôlissime Claude Piéplu). The art of Buñuel is getting to revealing the strangeness where it’s least expected. By combining the stories dreamlike, and real memorial, not only blurring the boundaries between genres, but it plunges the viewer into a space-time exploded. The unconscious, as the dream has no limits. Buñuel not more.

Fifth film from the French period of Buñuel, the DISCREET CHARM OF THE BOURGEOISIE will meet a great commercial success (Oscar for best foreign film in 1973), and remains one of his works, the most daring, satirical and irreverent served by a cast great. Not to be missed !