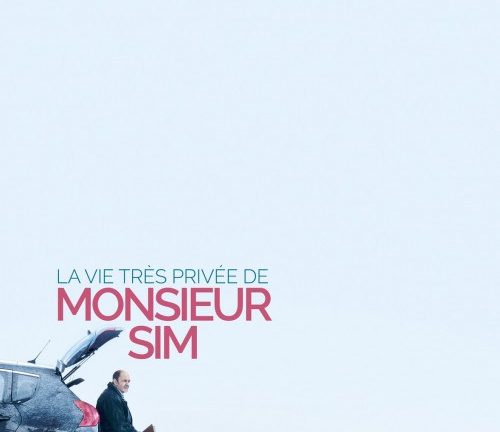 The movies of Michel Leclerc are always something to look forward to. They deal with serious topics through the use of derision, of mockery, of irony, of the offset, the sharpness of the spirit, dialogues are sharp and a sense of comic situations. Long after the vision of his films, you look back with a smile and a small thought that has been lurking in our heads. It was as well for The name of the people or Tele Gaucho. LIFE VERY PRIVATE MR. SIM is no exception to this rule. With this small addition this time is that he is not born entirely from the collaborative work of the director and his female co-screenwriter Baya Kasmi, since they are inspired by the eponymous book by the british writer Jonathan Coe. The meeting of these two worlds, so close and the adaptation of the novel on the screen are successful.

Francis Sim (Jean-Pierre Bacri) is a depressive happy, her life is not pink, but it is not sad. It is often at the side of the plate, next to his pumps, very first degree, without being a fool happy. He has not learned the codes to be a husband, a father, a man simply. It will be seen in its multiple attempts to trade with his own father, his ex-wife (Isabelle Gélinas), her teenage daughter, her boss, the clients that approach and the people he meets. This is a man who rows, who tries, who fails, who seeks the spark wherever it presents itself, lives, in short. It was this faculty of naive and sometimes pathetic to go and engage in dialogue with strangers, on any topic that comes to his head and he is convinced that a man died of boredom to force them to listen to it.

It is thus the knowledge of Poppy, played by Vimala Pons, actress fetish Baya Kasmi (I am to you right away) , and cross in As a plane of Bruno Podalydès. Poppy will make him meet his uncle Samuel (Mathieu Amalric), who in some way, will help to upset his life by lending him the book that he wrote on a browser “The strange voyage of Donald Crowhurst”.

The scenario to Michel Leclerc met with the intelligence to parallel these two lives, because this story’s obviously going to echo that of Francis Sim. The more this progresses in his reading, as well as in another document written by his father, the more he will understand who he is, where he comes from and where it goes. LIFE VERY PRIVATE MR. SIM deals as well themes important to both writers : the impact of family origins and the weight of secrets on the lives of the characters. This impact is never addressed frontally by means of suffering or ill-being of the heroes, but always in a more natural way, as part of a whole that the developer gives us the desire to know. He told us the feeling that certain people not to be completely in their lives, to be guided by it, not to choose, not even suspecting that they can change things.

François will discover that there are other paths to traverse, that it will take. It is the GPS in his car for his new job which, symbolically, is going to help him. On the road to Provence to sell a unlikely toothbrush green-haired wild boar, it will make human this voice GPS (it is the singer Jeanne Cherhal , who lends him her female voice) by creating a virtual relationship, the styling Emmanuelle, imagining her questions and making her the confidant he never had.

“LIFE VERY PRIVATE MR. SIM is a portrait moving and delicate of a man to drift, which clings to the rock of his memories and learns to reconnect with his emotions.”

LIFE VERY PRIVATE, MR. SIM provides , therefore, the portrait of a man adrift, who will hang on to the rocks of his memories and revisit them with his eye today. We have taken pleasure to accompany this character on the places of his childhood and to see it open up to the world, take a new look on life, to detach itself from the gaze of the other in and out of the box in which it is left to lock it up. A moving film that deals with the angle of the comedy of the way in which a human being can finally find his place in his life, when he is allowed to reconnect to his emotions and to express them. The benevolent eye of the director François triggers our empathy absolute.

The staging of the director is rich and gives us almost to see three movies. He comes and goes constant from the journey of Francis and that of Donald, whose story comes to us thanks to the sultry voice of Mathieu Amalric. And then between the Francis of today and the Francis of eighteen years, living with his friend Lino and his sister Luigia (Valéria Golino). Finally between his father, Jacques, and Jacques from yesterday (Vincent Lacoste).

With regard to the distribution of roles, it’s simple : the performers are all perfect. Special Mention to Jean-Pierre Bacri, or grumpy, or grouchy, or squeaky, or cynical as so often in his roles. He interprets in this road movie full of humour his character the most moving, with delicacy and subtlety. We hope that it will finally obtain with this film his César for best actor ! Mathieu Amalric gives the film the touch sensual, awkwardly and distanced that we usually enjoy at home, and that we had found too overrated in Step-Families. Note for his first role in the cinema (Lino young) Victor Belmondo, son of Jean-Paul Belmondo. Finally, such a Small Thumb who would play with the viewer, Michel Leclerc sows caméos and other small phrases. We had crossed the socialist politician Lionel Jospin in The Name of the people, Here, it is Jean Poperen, or the title of the last film of his partner, who will be cited.

A poignant film in which the music-fiction, signed Vincent Delerm, who composed for the first time to the cinema, leads us gently to a fall surprising, or even disconcerting.

STAR WARS VII, the WAITING, The HOUSE OF TIME, Mr SIM, the TASTE OF THE WONDERS, THE GREAT GAME, on THE LAST DAY Of YITZHAK RABIN…

Also read our interview with Michel Leclerc and Jean-Pierre Bacri

• Screenplay : Michel Leclerc, Baya Kasmi, based on the novel of the same name by Jonathan Coe

• Synopsis : Mr. Sim has no interest. At least that is what he thinks of himself. His wife left him, his job has left him, and when he goes to see his father in the depths of Italy, it does not even take the time to have lunch with him. It is then that he receives a proposal unexpected : to pass through France to sell toothbrushes that will “revolutionize the oral hygiene”. He took the opportunity to review the faces of his childhood, his first love, as well as his daughter, and make astounding discoveries that will reveal itself.
TRAILER