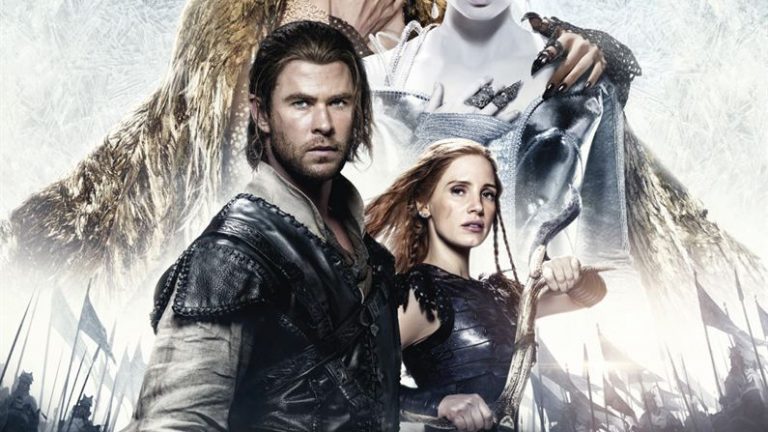 Following the success of Snow White and the Huntsman in 2012, Universal continued to benefit from the trend “fantasy”, competing and Disney in the field of its adaptations to live, who have already established a strong good revenue at the box office (Maleficent, Cinderella, and since the 13th of April, the Jungle Book). If a grain of sand has slipped in the gear when Kristen Stewart, title role in the first film, has refused to sign for this sequel, the producers have managed to bounce back by engaging two other actresses in high demand, Jessica Chastain and Emily Blunt, completing a cast worn by Charlize Theron and Chris Hemsworth. On the strength of these four heads, posters, a favourable economic climate in which the public responds to stories magical and artistic direction, promising to respect the visual qualities of the previous album, THE HUNTER, AND THE ICE QUEEN went so confident in the battle of the blockbusters. By adding the sub-title, “The Chronicles of Snow White”, Universal, gave away his ambition to want to develop this sequel, such as the introduction of a franchise that could arise in the coming years, as many opus as there are references to draw in the bestiary of tales of fairies, and then connect them to the interior of the same mythology, the way of the series Grimm and Once upon a time.

Four years ago, the first installment of the franchise directed by Stephen Sanders, was clearly cut to appeal to an adult audience, its aesthetic quality is used to define the dark tone of the story and the cruelty of queen Ravenna. Today, something sounds wrong in the kingdom of Snow White, as if Cedric Nicolas-Troyan, wanting to stick too closely to the model established by Sanders, knew that imitate, repeat the same patterns, the same feats without find really the way to add a new poetry, or a new approach to the adventure story, ultra-tagged. Certainly, on the show as a whole, one feels a sense of continuity and coherence with the artistic direction of the previous film, mixing cleverly an aesthetic rough and warlike an action film agree heroic-fantasy, to the splendors that require the gilding and the evil spells of the enchanting tales. But this imagery is so present in the media, that in the absence of originality, the exercise seems to be just mastered, and skillfully executed.

On paper, the scenario is promising as the first act of the film takes place seven years before the victory of Snow White on Ravenna, and tells the story of the past of the Hunter, then a soldier in the army of Freya, the queen of ice. Then the rest of the story takes place where we left the heroes at the end of the first game, forced to fulfill a new mission and face his past at the same time. This concept of a prequel/sequel has the merit of enhancing the main character while expanding the world in which it operates, and the prospect of new challenges, which relate to both his humble person and the fate of the world around him, was enough to excite. The absence of Snow White on this adventure is also a problem quickly evacuated since the interest for the character of the Hunter is doubled and that the newcomers also have something to appeal, since they are embodied by the two actresses emeritus : Jessica Chastain and Emily Blunt, even if any two fail to express the subtlety habitual of their game.

“The imagery of fantasy is so present in the media, that in the absence of originality, THE HUNTER AND THE ICE QUEEN just seems restrained and skillfully executed.”

But the two stars also beautiful and talented they may be, may not renew by their presence rules to a blockbuster that follows too closely of the archetypes plays out. To fully appreciate the film that is offered to us, we have to accept to see a review of the basic elements of this kind of story : stop in a tavern where thieves come to disturb the rest of the hero, the same hero who drags companions on the roads of dwarves, serving as a valve comic in the case of voltage, and all this little world was introduced to in the castle of the queen in the last half hour of the film by knocking out a few guards on their way etc, I don divulgâcherais not the twists and turns the most important to the story, but even the return of Charlize Theron feels badly rehash and added nothing, neither to the character of Ravenna, nor the place of this type of antagonist in this kind of story.

THE HUNTER AND THE ICE QUEEN was, all the same, it is interesting that he asks a question sound to fans of the genre : “at what age is intended ? Just like the jungle Book, currently in theaters, it has passages far too scary for younger children (the trauma of Freya, for example), and yet the candor evident from some scenes in risk will discourage those who are waiting for a show to mature, without complex vis-à-vis the violence or the complexity of human relationships. Here, a joke ribald follows a plan worthy of a Disney, a character worthy of Narnia meets a warrior escaped from Game of Thrones. Who is the intended audience in the end ? The adolescents ? The young adults ? Adults who have kept a child’s soul ? Broad question.

• Synopsis : After the defeat of Ravenna, defeated by Snow White, Freya the ice queen sends her warriors to retrieve the mirror of which she is the only one able to catalyze the dark faculties. The Fighter, who once fought in the ranks of Freya, goes in search of the mirror.