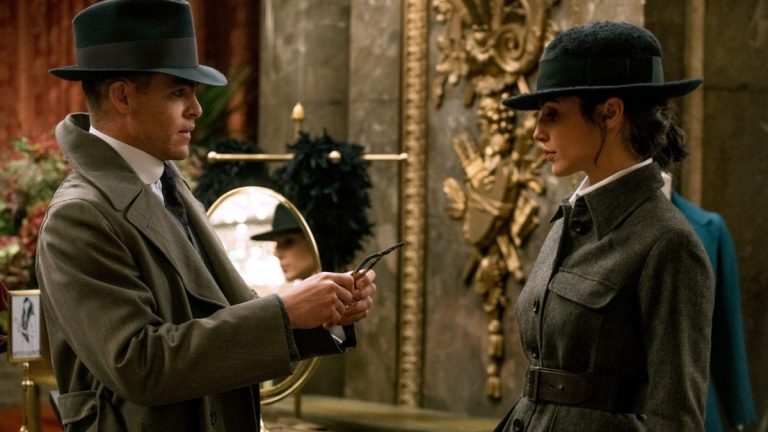 Under its air of feminist film and modern Wonder Woman reproduces the usual clichés, but it is no less an entertainment to be convincing.

During the pre-first paris at the Grand Rex in WONDER WOMAN, bringing together public and journalists, a viewer dares to suddenly yell : “Fuck ! “. A few laughs, embarrassed all the same, before a girl starts to turn : “Fuck ! “, causing hilarity and applause from an audience boiling. The scene that caused this double intervention, occurs in approximately half of the film, when the heroine, Diana (a. k. a Wonder Woman), is about to receive the first kiss waited for his colleague masculine, soldier Steve Trevor. If the first response in the room recalls unfortunately the sexism of our society, it remains nevertheless revealing to one of the concerns of the film, that does not accept fully the decision power of the woman. Regrettable and symptomatic of the relationship man / woman, classic Hollywood, in which even a film sold as the blockbuster feminist and modern does not seem to be able to escape. Yet, several big productions have been able to manage the equality of the sexes, with the female characters strong and independent without falling into the emasculation and by not passing only by a physical force), including by obscuring any romance possible. The image of Mission Impossible : Rogue Nation, Mad Max Fury Road, or even Alien first of the name, including the character of Ripley remains as an example.

This independence of the heroine, compared to her male equivalent, is far from being so present with Wonder Woman. The showing, during a good part of the film, a form of passivity. Because it is indeed Steve, who conducts the story, taking most of the decisions (the one to prevent, first, his superiors of the situation, to obey, to form a team, go to enemy territory…). Of course, Diana will at times make its own choices, such as coming out of the trenches and extending in the field of battle, under the eyes of the astonished men – great sequence revealing the powers of Diana. But that goes to make a character out of a follower, capable of initiatives, only in the second time, on head shots. Was it so difficult to give this character the initiative to submit the draft document important to the superiors of Steve ? Or be the one who is thinking of adopting another outfit to go unnoticed in this new world, so different from the island of the Amazons, on which she has always lived ?

Of course, his character is careless and naive (which gives the film a lightness significant), appears consistent with the character presented, but still disappointing compared to what was advertised ; a true leadeuse men. Obviously, it is necessary to replace WONDER WOMAN in context hollywood, where the change is not easy. A big production on which a director like Patty Jenkins (out of the closet after Monster in 2003, a few episodes of the series and two tv movies to its credit) may not have total freedom, and appears more as a figure of marketing. It would be a shame to reduce the film to these elements as a sub-layer, more awkward than anything else. As much as it did offer a few remarks, “feminists” fun and relevant, like on female pleasure, which would not necessarily be a feat male. Of comic elements, but largely symbolic, they refer to the time of the film (the end of the First world War), however, echo the current society.

In addition to this lightness that manages to make the messages relevant, WONDER WOMAN proves to be especially much more consistent scénaristiquement than its predecessors (the films of super-heroes at DC). With a plot sufficiently simplified, although based on a certain Captain America (2011 Marvel). Diana, warrior amazon, trained since his childhood, meets unexpected soldier Steve Trevor, who informs him of the terrible war in progress. The assumption that there is a shot of the Ares, back on Earth to mount the men against each other, she agrees to accompany him on the forehead, with the objective, fight the god of war. Clear and effective, avoiding weighing down the narrative with too much sub-plots – major problem of BvS, rich but incoherent and indigestible – WONDER WOMAN offers the entertainment expected. Worn by Gal Gadot sensational and particularly endearing, the film gives back the pleasure that knew how to cause the films of super-heroes. Side action, finally, it turns out to be rather subdued overall, and especially sufficiently readable even when abused effects of slowing down / acceleration, own Zack Snyder (co-writer and co-producer). A shame that a final, ridiculous, riot of special effects, hideous, and a moral niaiseuse around the love (further reducing a little the character of the heroine stereotypes), does not come to ruin this good together.