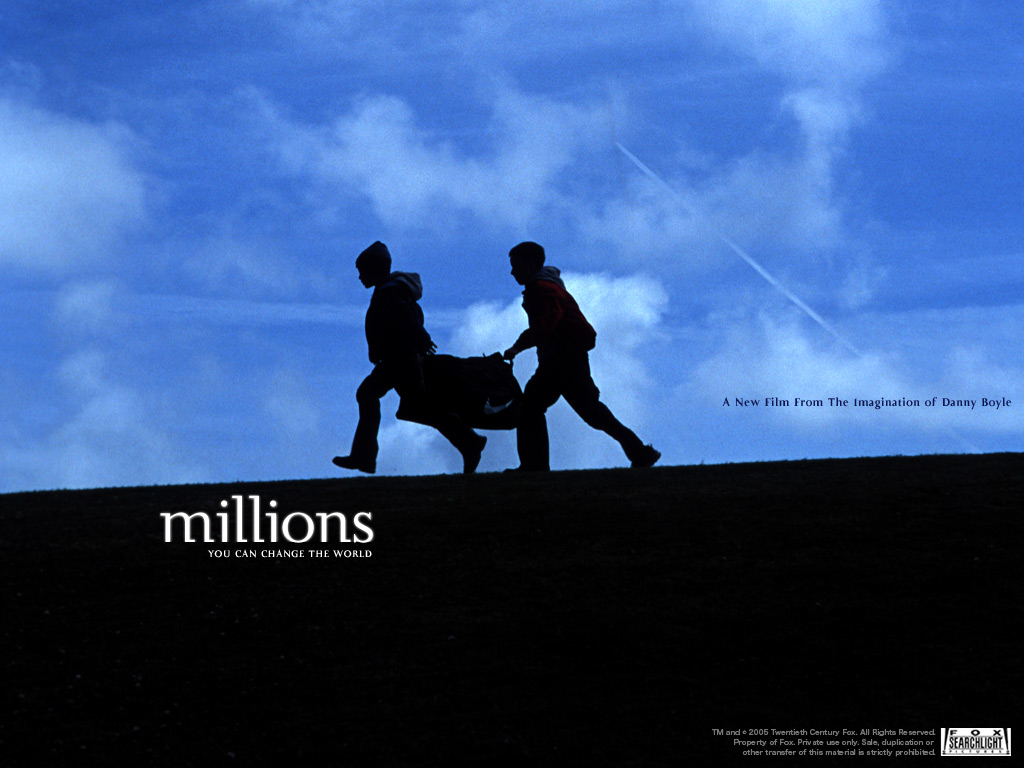 Squizzz continues with his study of Danny Boyle in the us, delivering us a chronicle of “Million” movie which is certainly the least known of the entire career of the director.

“Million” is like a 180° turn to the director of ” Trainspotting “, “Small murders between friends” or even ” 28 days later “, as he attacks this time to a movie for children. This may explain the low success of the sixth film from Danny Boyle. However, as long as you have kept a child’s soul, it is not inconsistent to love the early works of the director and this wonderful modern fairy tale, full of colors and poetry and who, despite everything, bears unmistakably the imprint of its author.

“Million” respects all the codes of story-telling. First of all, it is a distorted reality, including its pitch, which places the action in England in the full transition to the euro, a fact that has never occurred. Then the world that is portrayed is always halfway between reality and a vision child. The photography is very colorful, like a animated movie or like a child’s drawing. The subdivision where the family lives, makes one think of a world of Playmobil with its garbage violets, or even one model of electric train, including at one of the last scenes of the film. The house in particular is in turn assimilated to a simple remains drawn on the floor, then a construction set, or even a doll house (see the plan sequence against dive following Damian through the different parts and ignore partitions and ceiling). The sequence of night that follows Damian up to his old house also recalls many illustrations of children’s books, and has a very theatrical, with this further light that directs the child, like the star of the shepherd. The donkey cardboard dough gives that extra magic to the scene.

The fairy tales are replaced by saints, who are not there for a catholicism exacerbated, but for their surreal and most importantly as ambassadors of the goodness and the belief in a better world which sucks Damian. They appear as guides for the young hero. By contrast, the big bad is camped by the thief who wants to recover his due, but of which one knows not whether it is real or just a vision of the spirit of Damian, such a fear caused by the illegal origin of his loot. There is, therefore, as in any fairy tale opposition of good and evil, but the film is not as black and white as that, and what is a more realistic view of morality he defends, as we shall see later.

However “Million” in defense of the values traditionally taught to children, starting with that of love and of the importance given to the family. The emotional stake in the main of the film lies in the death of the mother of the two children and in the way that they are going to have to go through to accept it. The beginning of the film might appear as a new departure (with the move) and the kids use the death of the mother as a subterfuge to get what they want, it’s easy to understand that the death is recent and that no member of the family has been mourning. The father still sleeps with pillows to fill the empty space in the bed. The brother of Damian does not support the entry of a new woman in the life of his father, and to hide his discomfort behind a force facade. Damian is perhaps the one that accepts the best of this test, hoisting her mother beyond a mere human being, like an angel that can never really die. The sequence where Damian returned to the place of work of her mother shows perfectly this feeling, with its saturation in white light, which gives it a divine aspect. The scene also shows his acceptance of passing the torch to his ” new mom “. The presence of the thief, echoed his fears, his doubts, that he ends by leaving him behind to join Dorothy.

“Millions” is also a tale about the last moments of candor and dreams of a child who will soon be confronted with the reality of the world. A correspondence between the two scenes of the discovery of the bag, illustrates this idea. The first sequence is seen as a miracle of heavenly origin by Damian, balance by opening a magic bag, which unveils the loot. The second, which occurs at the revelation of the exact origin of the money to Damian, gives exactly the same plans. However, she reveals the real origin of the spoils in making up the train, and, especially, ends on a bag already open when the tickets no longer have the same value. It is balance via a crossfade red, witness the horror that goes through the mind of Damian, who sees the truth of the world burst at the figure. Thus the message of the film is may be there. Without lying to the children, because many times the things in which Damian believes are being challenged (even the saints put several times on hold), “Million” seeks to preserve that part of the dream, of innocence, which in the end we miss when we are adult.

Seven years after “A life less ordinary, Boyle found one of his favourite themes, the money, so that one could almost include “Millions” in a ” Bag of Money Quadrilogy “. The film is a bit of a “Small murders between friends” for children. In addition to the initial idea (the heroes find themselves with a bag of money on the arms), the two sequences are not dissimilar to the first feature of the director. The one in the attic first, where Damian is going to try to hide the bag, but especially the discussion with the family around the bag, made of successive plans on the various characters with the notes in the foreground, copy/paste of the ” Small murders between friends “.

If the film is not as corrosive as its big brother (remember that it is a movie for children), the criticism that he made of the place of money in society is not devoid of interest, and rather well fed to be within the reach of most young people. Each of the two heroes see in this money a full power. Damian first of all is considered the answer to the misery and poverty. Anthony has a vision of a more adult, in all this she was more lucid but also more selfish and more casual (he wants to spend his money in investments but also in the trivia). Damian will constantly be confronted with this vision, the more adult of the cash (including the share of his father), and understand that money does not make miracles. The moral is admittedly a little simplistic and utopian but not so far away that it’s the ” Small murders between friends “, which showed that the money ended up losing their humanity to Men. The end, however, is here more positive, seeing the love and generosity win. But would it not be better to attempt to pass such a message to children ?

Fed up of films for kids with a realization plan ? Then rejoice, for this is not because he made a film for children that Danny Boyle abandons his paw so characteristic. As usual, the director keeps a style that is aesthetically very strong. We have already seen, it gives the movie a very childish manner. For this he used a lot of light and colour. The yellow is very present, especially in the sequences of nights, to give a warm climate and protector in the midst of the coldness of the night. It is also a colour that he associated already to the childhood and remember in ” 28 days later “. His camera is, as very often with him, very moving and multiplies the plans to be innovative, made of the dive, anti-dive and other travelling. This technicality in the plans is most often there to support the scenario and feelings of the characters. For example, after his talk to the school about the saints (when the other children talk of footballers), a plan at the top of the shoulder to completely insulates the child in only one-third of the screen. A transition plan because of letters on a table shows that the children welcome him in school (this type of interlude inventive is very common in the film, bringing a real lightness). The following plan shows Anthony telling her brother that it gets away from the others by its way of acting. The plan closes with a pull back insulation to new Damian alone against a wall in the middle of the playground. In the same vein, the discovery of the burgled house is filmed, either for the plan as a whole, or for close-ups on faces, through a broken mirror, which transcribes clearly the impact of the event on the family.

And then there is a sequence of the turning of the train. The great Danny Boyle, who will delight, no doubt the followers of his cinema. The director then translates cinematically what the character in the film tells the story with its small cars, and it’s fun all the same. The avalanche of wide shots and tight around the saturated colors, perfectly punctuated by a dynamic editing, fits perfectly with a voice-over that made the body with the “Hysteria” of Muse. Then Boyle is a break of pace to initiate the second part more raised, accompanied by the tragic “Black-Out” of Muse, which gives all its dramatic power, to the revelation of a deception that is going to upset Damian. This sequence is a little showcase of this film, which, although intended for a young audience, don’t forget a staging worked, which will carry and also the accession of the great children.