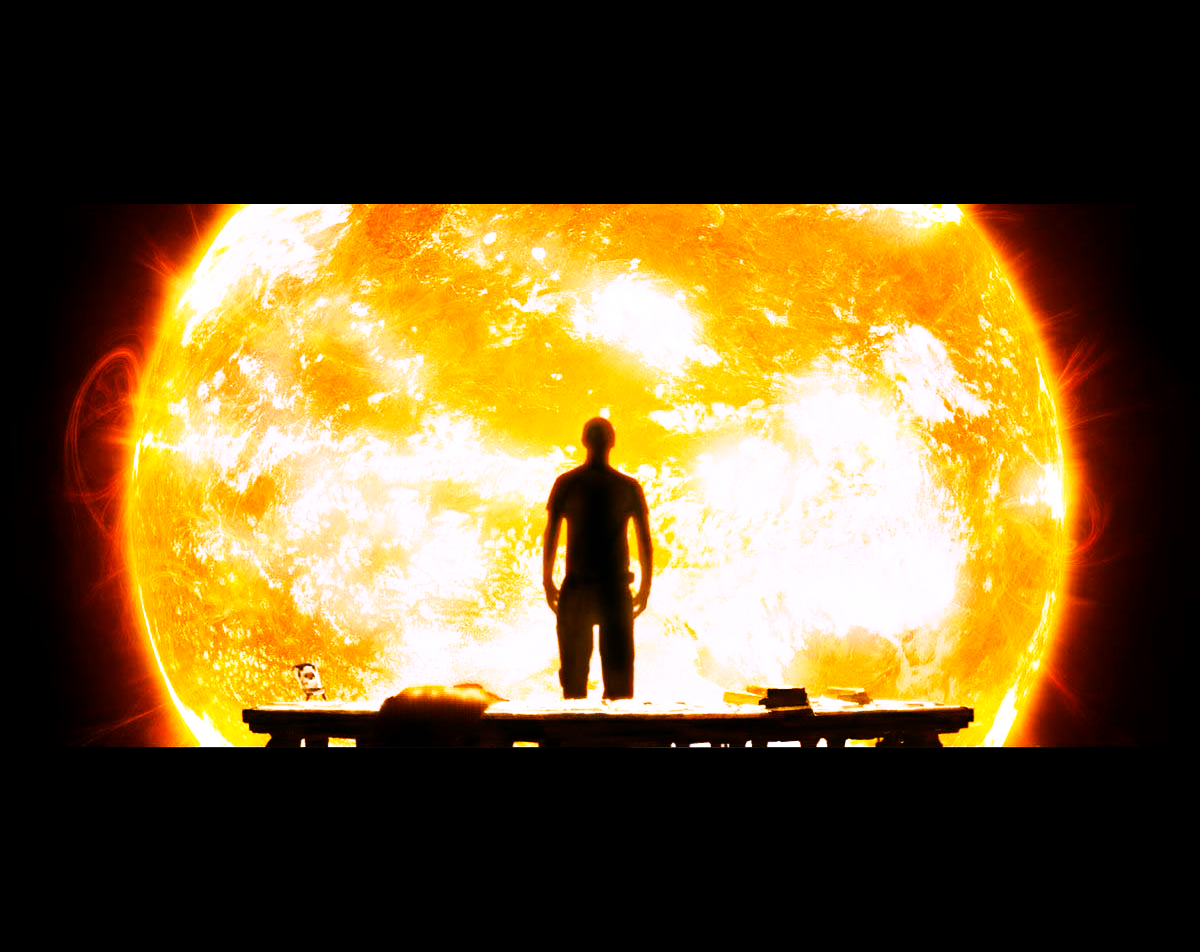 It was a little bit of time that Squizzz was not returned with his chronicle of the work of Danny Boyle. The error is repaired, here’s to you the analysis of the 6th film of the british director (who is one of my favorite). Good read.

Sunshine sign the last collaboration to date between Danny Boyle and Alex Garland, and the first foray of the director in the universe of science fiction. By not scrimping on the special effects breathtaking, Boyle manages, however, to make Sunshine a true auteur film to the plastic beauty that is undeniable. In the same way Garland sign, a scenario that includes all the codes of the genre but with a background far more complex than it seems. Despite all of its qualities and a very good critical reception, Sunshine does not move, unfortunately, not the crowds, but still a nugget for the fans of SF.

Like never before, Boyle wanted to create in Sunshine is a special atmosphere, which will put in awakening all the senses of the spectator. From the first images, a climate of strange sets in, a kind of quiet, far too quiet, where the voice-over asked of Cillian Murphy mingles with a mixture of thuds that come to disturb two times a music accents, hot and metallic when the sun comes flooding the screen. Throughout the film the sound takes a special place, it becomes almost a character in itself, as if it were an invisible entity. Boyle exacerbates many sounds, which usually would be barely perceptible, creating a atmosphere very intriguing, which can be sometimes soothing, sometimes scary. Some blame the developer not to comply with, such as Kubrick, the silence of the space, but remember, re-ignite the sun with a nuclear bomb is not very plausible either. In addition, these thuds of movements in the space reinforce precisely the idea of silence and isolation in which is located the crew.

Visually the experience is also intoxicating. Boyle plays a lot on contrasts of colors that are still very much in the trenches. You can quickly switch between the yellow blinding and burning sun, a blue-grey very cold and sad. It should be noted also a few scenes where white dominates, as in the sequence of the suicide of Trey, which gives it a very surreal and soothing to the scene, reinforced by the flight of a recurring bird, as if something higher was reached to avoid the Mace to commit murder. Boyle does not hesitate to play on the distortion of images, especially in the final sequence, in which he will also multiply the frames reversed and the short, stop-frame, giving the scene a madness and total chaos, in which the characters act almost on instinct. In this sequence, as throughout the movie, the editing work is essential, when we see the multitude of different plans that are linked. The spectator is very often resulted in a whirlwind of heady plans, except when the assembly wants to be more laid back for the plunge in a quiet area but also intoxicating.

The importance of the senses into the feeling of the Man is directly represented in the film, during the session of visiothérapie, where Mace finds himself embedded in a whirlwind of images and sounds that reminds him of his past and eventually soothe.

1st key sequence : the output in the space

The first big sequence of the movie sounds almost like a final sequence, both by its structure that by the tension that emerges from it. It begins with the farewell of the hero to his “girlfriend” (although the relationship between Cassie and Capa is platonic, it is undeniable) that closes symbolically in its combination, as a sign of farewell, and then follows a last look through the window of the mask. The output is then in a quiet posed, the pace being very slow, Boyle did not hesitate to play on slow motion to create a kind of floating. The plans are very broad on the ship as opposed to the very close-up shots of the inside of the masks of the astronauts, reinforcing the anxiety related to the vastness of space and the feeling of claustrophobia combinations. The tension is born primarily of the regular movements of the different parts of the ship, and sounds very deaf, and then the emergence of the disruptive element, namely the sun begins to appear.

The failover of the scene is quite unexpected because it occurs in parallel of the resolution of the problem starting. The viewer is aware that the explosion in the garden is a problem but is baffled because nothing is taken immediately into consideration either by the characters or by the staging, which remains raised for a good minute. The pace will then accelerate in particular by sequences where the assembly makes beautiful use of the multiplication very fast plans, before to revert back to more posed when the consciousness of the inevitability. The result of the stage will alternate variations of rhythm. This part hinge of the sequence is strong enough from a symbolic point of view, since it highlights the destruction of the Earth (represented by the garden) by the Sun (represented by fire), and clearly puts in danger the success of the mission.

The end of the sequence will be less play on an acceleration of pace by the assembly, as by the dramatic intensity given by the music (the now famous score by John Murphy). The tension will be born from the opposition that made Boyle between “dolly” ultra-fast in the shield of the ship, simulating the arrival of the sun, and the olympian calm of the commander who sacrifices himself for his mission and ends up indulging in the sun. A note to the passage plan on the face of the commander more than suggestive of “2001” from Kubrick.

2nd sequence key : the discovery of Icarius I

This sequence is clearly parallel the fate of the crew of Icarus I and II, and therefore has an aspect prescient. Upon arrival in Icarus I, neither the astronauts nor the spectators, do not know what they will find. However, the spectators know a little bit more, because as soon as you enter the ship, Boyle inserts a first subliminal image of a member of the crew of Icarus I, on the day of departure. This image will have two impacts on the spectators. The first will be guiding them on what the crew of Icarus I became, the association of this image to the abandoned place, giving one side of the spectrum. The second will be to make them do the approximation with the crew of Icarus II, they saw a picture equivalent at the beginning of the film. But the sequence wants to be much more optimistic than we want to believe it, because in the midst of this atmosphere of end of the world, nature, life, the Earth (via the garden) has managed to come back. The future of the crew of Icarus II is emerging here : if they want to save their planet, the sacrifice of the individual is going to be mandatory. It is not surprising then, that the sequence ends with the death of two new astronauts.

A camera to save humanity

One of the major themes of Sunshine is the constant opposition between the human being as an individual and humanity as a whole. Are we ready to give his life to save others ? The importance of uniqueness in the approach of the whole crew, and the self-denial of everyone facing the mission appears early in the film, the editing, putting permanently in parallel to the inside and the outside of the ship, showing that the crew must do body with him, and that is the mission that matters more than the individual. The multiplication of the outer planes requires also the loneliness of the astronauts in the middle of the vastness of space, and will quickly place the action of the film in the camera. To strengthen this impression of solitude, and the utter abnegation of which will have to demonstrate the astronauts, Boyle and Garland choose never to show the Earth (except at the very end of the film, when all the crew sacrificed himself for his planet).

The camera takes on even more importance in the last part of the film looks like a horror film, which is reminiscent of Alien. The parallelism with the film of Ridley Scott goes up to the presence of an alien aboard the ship, the identity is, however, very rapidly revealed by its appearance in the subliminal image. The dimension of the sequence, however, is more tragic because the future of the crew depends the future of humanity.

The authors will further push the camera by reducing more and more the vital space of the hero, placing first in an airlock, and then in a combination. The feeling of claustrophobia associated with a slowing of movements imposes a voltage relentless the film is much more effective than action at a pace that is too intense.

The very end of the film goes to the opposite place in the vastness of a decor straight out of Cube, a film which takes the same theme of individuality in the face to sacrifice for the other. The fact of putting the two heroes, then a single, in the vastness of the natural accentuate, of course, the loneliness in the face of their task, and their self-denial. Deliberately they are placed in heroes, saviors of humanity.

The Sun is a special place and very ambiguous in the film. It is at once the star is essential to the survival of humanity, but at the same time takes place in each instant as a brake to the mission, which has a goal of saving the Earth. The effect exerted on the different members of the crew is the same. The sun is what could kill them at every moment, but they have for him an attraction irresistible. Three of the characters die in a complete fulfilment in the face of the sun. Their sacrifice becomes almost finally an accomplishment, the one touching the origin of Man.

Danny Boyle has wanted to with Sunshine wonder about the origin of Humanity, and on the different ways to approach it and be very scientific, or, conversely, by a more spiritual and religious. We take one or the other approach, the end takes in all cases a dimension that is very specific, which is not without reminding one of the themes already touched on by Garland and Boyle in ” The Beach “. In the first case, the Man arrives at the ultimate stage of its taming of nature. In the second, the Man comes to take himself for God, to see to the surpass in the being to be reborn…