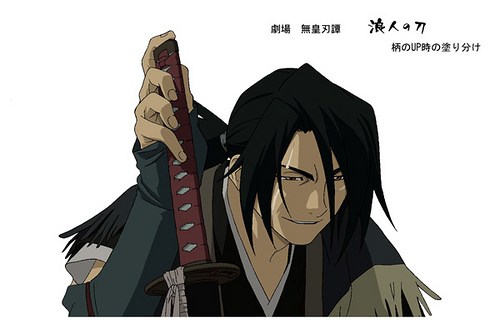 The pitch : The story of Sword Of The Stranger takes place in the Japan of the era, “Sengoku”, in the midst of civil wars.

A rônin with no name rescues a young orphan, Kotarô, and his dog, Tobimaru, during a fire. During this time, a mysterious militia coming of China research Kotarô in order to use it to perform an occult ritual with the eternal life. Among them is Luo-Lang, a swashbuckler emeritus thirsty combat to the orders of the lord of war Bai-Luan.

Kotarô committed then the rônin without a name as a body guard in exchange for a precious stone, a monk gave him, and they decide to go on the road together.

From this moment on, their destinies are going to be inexorably linked. Then begins a moving story of friendship between two individuals who have experienced many tragedies in their personal lives : a samurai without a master and without a name, who has sworn never to touch a sword, and a young boy who has lost his parents.

The first film by japanese director Masahiro Andô, Sword Of The Stranger will be released on the screens on may 27, 2009.