Almost thirty years to the day after his disappearance, Lisa Azuelos (As You There Is Beautiful, LOL, LOL USA, A Meeting) book more than a biopic, a hagiography on Dalida. What a boon for this film director committed to the cause of women that examine the life style but it’s tragic this icon to the 140 million records sold, who decided one evening in may, 1987 to put an end to his days, judging them on a piece of paper that life was ” too unbearable “. Adored by much of the world, his gesture was hiding a deep malaise that Lisa Azuelos attempts to decrypt it by focusing on the period of the most exciting but also the hardest, 1967-1987.

Colorful and glittery, this film is a condensed, a certain vision of the life of the diva. If the passages the most well-known of its existence are there, which are interested, above all, Lisa Azuelos, this is not really his glorious career, but rather its intimacy, its tragedies, disappointments, love. As well, the filmmaker focuses on the sadness and the inevitability of its fate, and accordingly creates an obsession of unhappiness, which is noticeable in several scenes where the drama falls into the awkwardness because it is too strong. That said, putting in the backdrop of his great songs on the salient passages of his life in scenes, often magical, poignant and tender, it shows how the songs and his life were one. In this sense, it has captured the essential in the star : his quest for love. Developing enough originally a timeline that stands out from the traditional birth-life-death, she describes the fragility of the woman, it emphasises the lack of affection of a man and a child, she recounts the rubbing shoulders with each other on a regular basis with death.

But, by focusing on Yolanda, she forgets a little too much Dalida : immense singer, who adored his fans, a worker demanding and a perfectionist who has done everything to become what she was, a star of show business to the many friends, artists, a performer surrounded by authors and creators, a gay icon, the political commitments sometimes involuntary (Mitterrand and his supposed love affair, Chirac, etc.), a modern image of the woman in a society where feminist demands were strong, a personality which is prey to the wildest rumours or criticisms, sometimes physical.

In this film, only his or her privacy and his dramas seem to count. In an atmosphere of almost plombante, everything seems dark, sad and gloomy, from his birth until his death. However, though it is impossible to say everything in a movie is 2 hours and it should automatically make choices, yet it is the glorious and beloved Dalida which allows us to understand better the sad and fragile Yolanda, who behind the smile scenic refuge in his huge house in Montmartre, to find her empty sentimental. Omit this striking contrast here too little support, that is, omitting the keys to understanding his bitterness of daily life and the path that led to the depression, the lassitude of his public persona and then to the final act – this last item being the heart of the reflection that the director wished to develop. Instead, a first part monotonous and confusing, though awkwardly focused on his psychology and unnecessarily littered with replicas at the punchline that remove all likelihood, the whole truth. The aesthetic seems more important than the accuracy of the facts or the story, which seems to be lightly pruned of all shades of personality.

As if she had realized a little too late for all of this, Lisa Azuelos eventually engage the second to mount the film in his power by evoking (or rather, touching) these dimensions of personality discussed above, in a sort of medley giant who has the face, until it all slides into one end larmoyante without being masterful because quickly shipped.

Thus, even if we take our foot to the sound of the tubes Disco singer, this second part does not catch the first one, because then it all went but nothing in-depth. This then transforms the film into a work that is aesthetically beautiful but completely superficial.

Because eventually, one realizes that the director gives to see that a flawed image of Dalida/Yolanda. An image comparable to a gem, or a mind elevated to the rank of sanctity, an image so smooth and without faults, the fatalistic and tragic. In short, the image of the myth built, maintained and monitored by his brother, Orlando… who participated in the scenario development. The all refreshed by the director to accentuate, once more, the mark Dalida : after the various compilations, boxed sets, books, telefilm, there is now the film to feed and dust off everything that has been built around it during his career and especially, especially !, after his suicide.

Then, DALIDA is not really at the height of the diva that she was. But based mostly on the myth, difficult not to admit that this biopic manages all the same to revive this as there are more exciting in it, and maintain the magic that she delivers through her songs, thirty years later. In this sense, the sense of awe overwhelms us… That is, in the background, the main purpose of the movie. 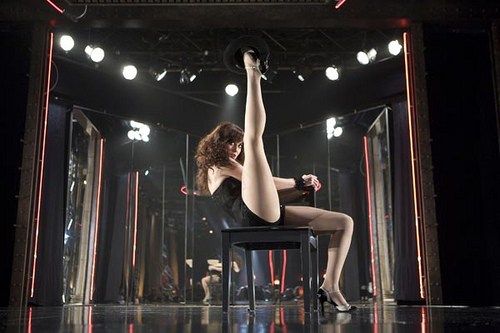