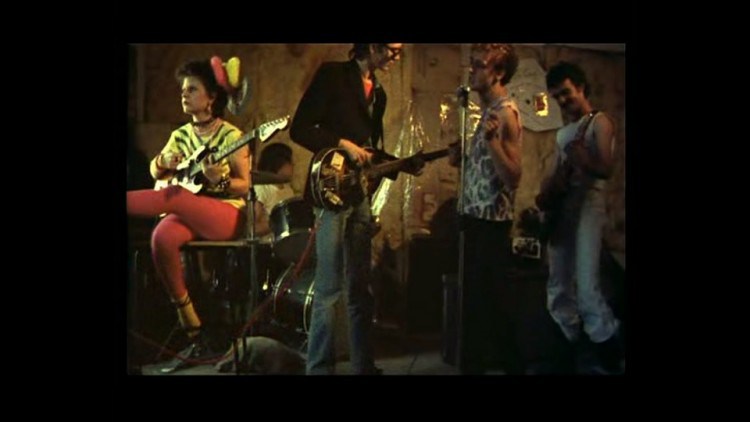 Thestory : in an area of Madrid, a succession of stories all the more comical one than the other, with Pepi, Luci and Bom to the center thereof.

Of course, it is better to know as little as possible to make the most of the surprise that is the film. But it should be understood that the various scenes that constitute PEPI, LUCI, BOM AND OTHER GIRLS in THE NEIGHBORHOOD always have a particular relation to the sex, or more precisely to the fun. How to give, how to receive it. By who, why, how long ; and a theme all in all a taboo, but still relevant. Pedro Almodóvar , as soon as this “first” film imposes a style and a way of filming, a freedom of tone.

Already, formally, Pedro Almodóvar is not prohibited nothing. Although seemingly limited by the means, the freedom broke out in each plan.

Not technically however. The film is clearly ugly, poorly-lit, badly-wired for sound (although the music stamped 80’s resonates surprisingly current). It should be seen as a film typical ; that of a director that still does not give as much importance to the aesthetics than the bottom.

No… This freedom is reflected rather in the tone of the film !

The stage is thus as alive as its heroine ; transmit a state of mind, an era, a way of living, unpublished. This is achieved by a representation is the singular of Madrid – its outside (streets of madrid, bars, underground gay), or even the interior, all full of personality, the various “women of the neighborhood”.

The aesthetic overall is rooted in the 80’s. But oddly enough, it seems to be neither dated nor old-fashioned, on the contrary, in line with the freedom of tone and staging.

By his pace then : Pedro Almodóvar is not encumbered by the ever complex developments and always prefer to show cause and effect, rather than explanations.

The ellipses are numerous and brutal. The scenes off-topic… whatever ! All of this constitutes a maelstrom sensory, social and existential that ends up by immersing us in a daily unique, sometimes whimsical, sometimes ultra-realistic. A daily or women, more than being the subject, are also the bone marrow, the brain, the flesh, the body of the film. The roles are thus reversed : the women are, think, express themselves.

Because Pedro Almodóvar tells the story with PEPI, LUCI, BOM… a history of women.

And not just on the surface : the director seems to have truly understood the concerns of these girls, but more usually the Spanish woman of the 80’s : As the title indicates, several women are introduced. Of Pepi, wife, free, imaginative to Luci & Bom the young and the quarantenaire, the dominatrix and the submissive ; the woman with beard is unhappy, the neighbor devout but not against a small fucking fast… Almodóvar presents us with a wide range of thoughts and reflections of women that, far from being anecdotal, eventually breaking one of the taboos of cinema : the search for and obtaining of pleasure.

As if Pedro Almodóvar had for mission to unleash the female pleasure, with all the violence that such a gesture would lead to. It is impressive to see the modernity of the company.

Rape, sado/masochism, Homosexuality… all of it is treated not as a taboo or a forbidden, but as a means to ecstasy.

Thus, taken out of context, the scenes of the film may shock, or even disgust – especially the very first scene that, without context, is particularly disturbing because it combines pleasure, and violence.

Yet, little by little, Almodóvar invites us to go beyond this assumption is probably a little provoc, and we will penetrate into a universe much more personal, much more soft and sensual at first. The quest of the pleasure gradually becomes more thoughtful, intellectual, sensitive. The carnal made up to the sentiments ; the pace slows down, observes more than he shows.

The state of play is exciting. Freedom brings happiness, but the other also. Love, friendship or company.

A freedom of tone which, as we can easily imagine, had to create a small effect in 1980 and catalog the film as perverse or unhealthy, whereas, conversely, he demonstrates a genuine love for her subjects : women, pleasure, feelings

And it does not go by four paths. Failing to be shown explicitly, sensuality, unbridled is very strongly suggested. By the words, of course (the film is incredibly well-dialogued, even if it is very vulgar), by the images, which are sometimes suggestive, sometimes explicit, often memorable, and then in the metaphor, a constant. In this regard, the parody of the advertising campaign in the middle of the movie is cult !

No aspect takes over another, which allows the film not to be a simple object provoc, but on the contrary a coherent whole, a plea for sexual liberation.

In short, PEPI, LUCI, BOM AND OTHER GIRLS OF the NEIGHBORHOOD is a unique film, unlike any I had ever seen.

It is perhaps for this freedom of tone without the same as Pedro Almodóvar is a filmmaker so respected until now. 35 years ago already, he used a language that is timeless theme still relatively taboo : the pleasure of the woman. More than that, he developed this premise up to make the link with the affective, which he defined as as much needed as the carnal. A study of the desires of the Spanish woman of the 80’s : Absolutely fascinating, and to discover permanently !