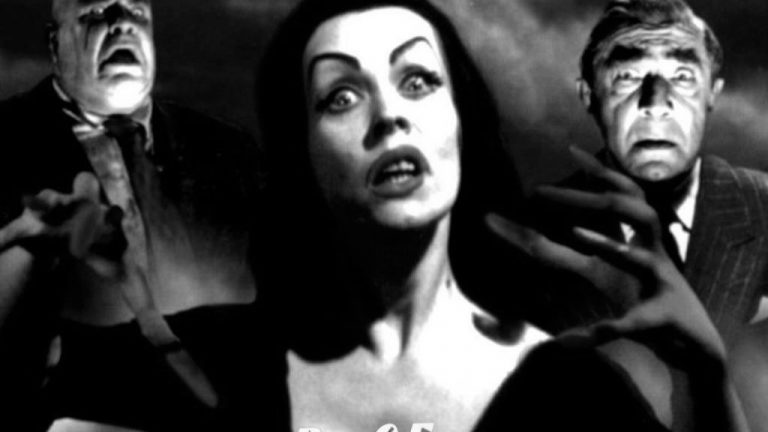 Aliens apply to the plan 9 used to maneuver the earthlings. Evil Plan, it is the resurrection of the dead by introducing electrodes at long range, stimulating the pineal gland of dead bodies recently enterres.

Today, in association with MrDomainePublic, the Blog Of The Film offers you to (re)discover the cult movie Ed Wood, Plan 9

* Plan 9 From Outer Space is the latest film by the actor Bela Lugosi, who died August 16, 1956, even before the official beginning of the shooting.

* Shortly before the death of Bela Lugosi, Ed Wood had filmed a few short scenes with the actor. Wishing at any price to include these scenes in his film, Wood hires a substitute to shoot other scenes with the character played by Lugosi. This substitute, which is none other than the chiropractor of the woman of the Wood, no resemblance to Lugosi : more young, more large 20 good centimeters (Wood had found a vague resemblance at the level of the forehead), he plays his scenes with the cape of Dracula) Lugosi in front of his face to try to hide the deception.

* Plan 9 was financed by a baptist Church. To obtain this funding, Ed Wood and his entire team had to be baptized.

* The title originally was “Grave Robbers From Outer Space” (Looters of the Tomb of the Space), but such a title has angered producers of the baptists, which have suggested to Ed Wood to change it into Plan 9 From Outer Space.

* It took almost 3 years to find a distributor interested in the film.

* Michael Medved, a film critic american, called Plan 9 From Outter Space as the worst movie of all time, in his live, The Golden Turkey Awards in 1980. Moreover, it is through this, that this film is now famous and cult. In the same book, Ed Wood was promoted to “worst director of all time”, the posthumous title and has now many fans and success that he’ll never have known of his living.