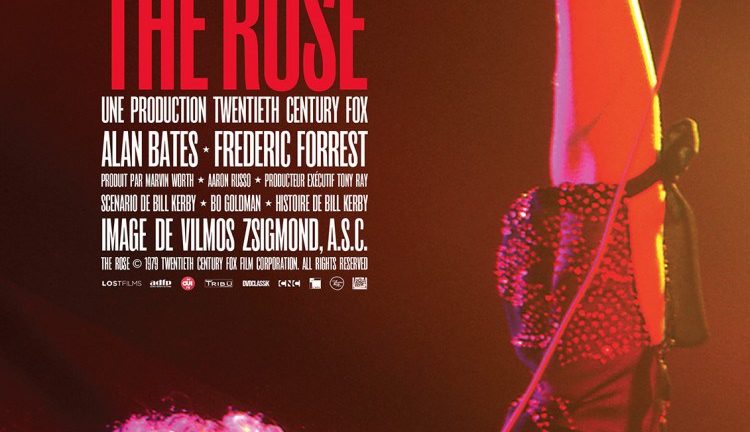 The film is then succeed for her sequences démentielles of musical performances to shots of searchlights and flares, and sequences of intimate on board airplanes or in bars décomplexés where Rose cries that she has cried on stage as to entertain his gallery. She makes the acquaintance of Houston (Frederic Forrest), a soldier and deserter, who she believes to be a time to find the redemption of true love. But his insatiable appetite for artist-monster away from his tower. After the cheers and screams of fans, the solitude, only accompanied by Pink on this journey of binge drinking, doubts, whims of the star and of the coke which it will never leave.

If the original soundtrack, recorded by Midler herself, was a great success which exceeded that even of the cinematographic work, THE ROSE is without doubt one of those films of which it is said (with an air serious and disappointed, and sighing lazily) that they were ‘badly weathered’. Recreating the atmosphere of an America of 1969, ten years later, its director Mark Rydell was already painting a canvas of surreal, vision of a fantasy country, a time of debauchery already idealized as a golden age. A few decades later, the offset is more. Bette Midler may not remove the film alone, despite the energy she radiates. The story takes place, he, in a chaotic manner, without a line of conduct, abruptly, and the musical scenes traînaillent. The third song sung in full, we suffer. So pay his site a concert or buy the album of B. O. (the songs are not bad, by the way).

“Without a doubt, one of those movies of which they are said to have “poorly aged”…”

In the hollywood cinema of the 1970s, there was something to eat and drink. Innovations and myths, a lot of protest and some of the products that would like to use all the wiles of the dream factory. THE ROSE is what american cinema in the great tradition of decades in the studio before the war. The film is, in fact, that a great commotion in the pure tradition, where the heard condemnation of the world show is matched only by the caricature virile soldier revolted camped by Frederic Forrest, Stetson screwed on the head, cigarette in the beak, bulging muscles and nonchalance valuable way of James Dean. It is too much…

• Synopsis : Mary Rose Foster, called ‘The Rose’, or the descent into Hell of a singer of rock ‘n’ roll faced the pangs of success, then, that the Sixties are coming to an end.