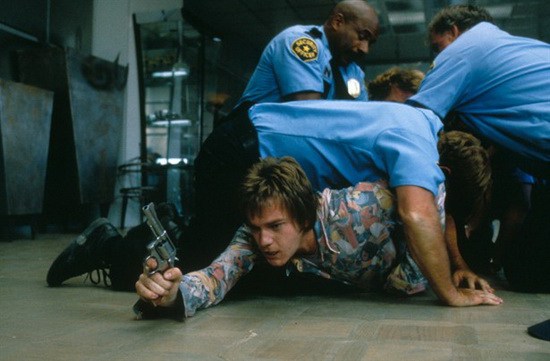 Third criticism of Squizzz and third film from Danny Boyle, not the most well-known of all his work undoubtedly a very good film, I’ll let you discover the critical

After the shock ” Trainspotting “, Danny Boyle crosses the Atlantic ocean to afford the luxury of a movie-recreation. Clearly, with “A life less ordinary,” the british director wants, above all, have fun and amuse the viewer. His romantic comedy, while respecting the codes of the genre, is also going to totally pulverizing mixing the romance, humour is very slapstick and bits of fantasy and thriller. If it is part of the movies rather unknown to the films of Danny Boyle, he did not less to discover, for its humor, its freshness and its originality.

Right from the introduction, the tone is set, Boyle and his screenwriter John Hodge we have concocted, a pure romantic comedy that will follow the pathways classically utopian love stories of cinema. Two angels have the mission to create a love story idyllic between two human beings, even though the love part in latte on Earth. And these two human beings oppose of course. It is a Eve of a new kind that gun, literally the apple, and seek clearly to tame her Adam. He is the looser par excellence, as ordinary as the roman station that he plans to write. But the burlesque, invites quickly in the story, the picture of this vision of Paradise, such a company in which the director, the angel Gabriel, is subject to pressures from higher-ups.

The meeting will necessarily be during an event that initially does not a lot and that will make our two future lovebirds to cohabit then they hate each other. To make it simple, our Robert will be forced to kidnap our Céline (or the reverse, we do not know too much). Then begins the next thriller in the film, during a sequence in the dynamic perfect, punctuated by the music of Underworld, and where, once again, the burlesque is quite in its place.

Little alchemy is going to be born, and it was then that everything should stop (Robert frees Céline) that everything truly begins and the two heroes will finally fall in love with one another. Boyle then plays the card of imagination and fantasy in a dance sequence worthy of a musical version years 50, giving a certain timelessness to their stories, the love stories of cinema. The scene also has a side of the dream, as a representation of what is happening inside the hero. The beginning of feelings between the two lovers is also transcribed shortly after, by a dolly in towards the two heroes in following a rope, as if it were the wick of a stick of dynamite that consumerait up to the explosion of their love.

But the awareness of their feelings is not going to do that a little later, after a boost of two angels, during an action sequence where they believe flirting with death. The mise en scene has overtones of a horror film, taking place inside a forest where the crows are legion, but the light is very solar and especially the music of R. E. M. will give a side to be reassuring to the scene, and the action becomes in some way the metaphor of the shock that occurs on the inside of the hero. And logically, the scene of the kiss occurs immediately after, even if the burlesque is going to quickly return to the top, instead of the great scene that Robert was planning with the vision of the death of Celine.

As in any good self-respecting comedy, jealousy will interfere in the middle of the couple and lead to an inevitable break-up… and a return of the heroin at mom’s. The reconciliation will obviously be challenging (ah !! the famous poem !), before prince charming comes in to finally deliver the princess a prisoner… of the two angels. Have the approval of the father will be a bit more complex, but Cupid will still end by shooting his ball in the heart of the hero. And they lived happily ever after, and had probably a lot of children.

This eventually makes little ordinary this romantic comedy (yes I finally decided, it is not regular), is that where usually all this beautiful story is due only to coincidence, all the strings are clearly shown to the viewer, via the intervention of the two angels.

The angels represent in any way the conscience of the hero who must return to the right path. The parallelism between the characters is quite clear during a sequence where we see the roles reversed between Celine and Robert, the victim officer, the kidnapper, the man treats the woman (he reads romance novels, does the cooking) and vice versa (it cuts the wood), while in the sequence that follows, the angels female and the male are clearly in their places (she reads the novel of love, he dabbled in diy). The mission of the angels is going to be to put things in order and to transform the conflict between the two humans in a love story.

The angels are pulling all the strings and dominates all the events. Two sequences the show perfectly. The first is at the beginning of the film, when the two angels are hired by the father of Céline for the issue. They overlook it by a small counter-dive and by collapsed outrageous from the father in his chair. The second sequence is towards the end, and shows perfectly that the two heroes have no other choice than to bend to the manipulations of the angels. Indeed, during the scene of blackjack, Celine 20 naturally wishes to stop, but the angel turned a deaf ear and eventually out the as who signs the victory of Celine.

Thus, it is clear that throughout the film the strings are completely biased. Because if the angels have morals a little strange which involve the use and abuse of violence to achieve their ends, they will never endanger the lives of the two heroes. Each sequence may initially contain a pseudo-suspense turns then necessarily to the stuffing. The delivery of the first ransom is a very good example. Although filmed as a duel of western (including the two opponents would be the two cars) with a right music and a disruptive element in the form of a “bomb” instead of the” el Dorado “originally promised, the sequence switches very quickly in the burlesque, pure and simple (the chrono stops as if by magic, and carrots replacing sticks of dynamite), up to end with a final” spin “. However, when at the end the angels are out of the race, a real thriller then goes to beat the final sequence. A suspense very well managed (even if there is no doubt of the outcome) and two levels (real and divine intervention).

The last part of the trilogy which started with “Small murders between friends” and then “Trainspotting” is going to take a wind somewhat contrary to the two previous ones, going in the direction a lot more entertaining and full of hope for the film. Because if the early money is the motivation of the two heroes, they are not as hardliners as the previous heroes of Boyle and Hodge (well, mostly Robert). And quick the money will pass to the second plan for the same to become anecdotal in comparison of the love. Only the father will place all along above everything, including his daughter. However, the one that will go up at the end of the film and not zappera not the superb animated sequence of the credits, will be seen that the two lovers do not count live simply with fresh water and returning for the famous ” bag of money “…