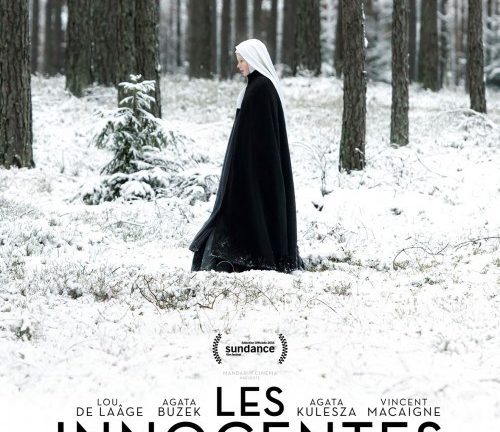 To read also our review of the film THE INNOCENT.

On the occasion of the presentation of THE INNOCENT in Bordeaux, we had the pleasure of meeting the director, Anne Fontaine, just before his departure for the Festival of Sundance, which selected the film in the category First under the title AGNUS DEI. Also present was the lead performer of the film, Lou De Laâge. She spoke with emotion and passion for the role of Matilda, their feelings in the face of the spirituality of the sisters and to the working capacity of the actresses to Polish.

What is the origin of the film and the subject matter ?

Anne Fontaine : the Brothers Altmeyer, producers of the film, I have proposed a treatment written by two young writers Sabrina B. Karine and Alice Vial, who had met Philippe Maynial, the nephew of Madeleine Pauliac. I then read his journal describing the events that took place in Poland, and I decided to do my own historical research and I have found the trace of the sisters of the convent. I then reworked the screenplay with Pascal Bonitzer, with an interpretation that is more novelistic.

I was smitten, caught by the subject, rich with a point of view of the human condition. He touches on the women, war, rape is a weapon of war. The theme evokes the spirituality, the faith. It speaks to the two worlds : the religious and the secular. There is, in these sisters, who are also women, a willingness incredibly powerful to get out of this situation, a solidarity between them, almost solar, to find hope.

THE INNOCENT also addresses the theme of transgression, which is to make decisions that bring the characters to light : the young doctor, with his hierarchy, the Mistress of Novices and Mother Superior. It is a story that is challenging, that is asking a lot of questions.

This is the second time that you are doing an historical re-enactment.

– A. F : I had, in fact, never treated historical fact before Coco before Chanel. We found an old abandoned convent in Poland, and have rebuilt a part of the scenery to be in total immersion. I have also held that Vincent Macaigne wearing a corset to keep right, because it was the dress of the time.

Can you tell us about what moves you in these sisters ?

– A. F : I myself have conducted two retreats in the Benedictine. I love this life in community, this report to the fervor, doubt. I say in the film : “faith, this is 24 hours of doubt and 1 minute of hope !”. I am very touched by the fragility, the report in the body, which is not expressed in the religion. I have also talked with many of the sisters, and the renunciation of motherhood is very painful for them. I tried to keep a part of mystery on the faces veiled, not to close the beings in explanations. We worked a lot on the lighting, the light, with Caroline Champetier, that I know well. I wanted to keep this state of suspension, capturing something of the order of the unsayable.

But I am allowed to go to the end of the movie to this allegory of life, a little more thrilled that this story challenging. I wanted to show the babies in the nursery, scene true as I had myself experienced when I was in Vietnam.

You have already presented the film at the Vatican, I think ?

– A. F :Yes, I presented a few days ago, in front of a Community of a hundred nuns. They were upset, told me that the attitude of the Mother Superior, would not have had to be also erroneous, and that the film was therapeutic !

“I love this life in community, this report to the fervor, doubt.”

Can you tell us about the character of Mathilde Beaulieu and the choice of Lou De Laâge to interpret it ?

– A. F : The real Madeleine was not a communist, I added this to Mathilde. I’m not certain that Matilda is an atheist. She is facing a health situation on the one hand and obscurantism on the other hand, but she does not give in to compassionate, nor to panic. It is in the action. She is touched by the nun who prays in the snow after his refusal to help, and this is his first transgression. Little by little, it is going to protect their secret, with delicacy, to give them comfort. And she is also to receive their support when she underwent a quasi-rape.

I’ve done a lot of testing with actresses, but I chose Lou because she has this grace, this cine-genius, this cool, this otherworldliness in some way. It has a very strong light in it, it can express in a look of an emotion of Mathilde. His character has its own mystery and does not express it in words, but will evolve throughout the story, make his or her own learning.

– Lou De Laâge : Because Mathilde is a doctor, it was important for me to observe and know the technique, so I worked with a midwife, learned to touch the bellies. It is a very beautiful role. Matilda is a modern woman for her time, she is meticulous in his profession, not so cold, but serious. And then little by little, it opens. She has faith in life. I tried to think about how Matilda is going to grow and I am asked the question, not of spirituality, but of what me, in this story, touched me.

Can you tell us about the history that lives Mathilda with Samuel ?

– A. F : I made Samuel a jewish doctor who has lost all his family in the concentration camps. The intervention is a way in angular to talk about the human drama. Vincent Macaigne brings to the character a lightness, a cynicism that hides emotions. The love between him and Mathilde is not conventional, it is a modern relationship atypical, such that one might cross in time of war.

What were the conditions of filming in Poland and how the actresses Polish work ?

– A. F : The immersion was difficult in this place, and with the thirty actresses and the team Polish, but this has strengthened our links. Work with both Agata (Buzek and Kulesza), it is like riding in a Ferrari. These are great actresses, who have a great involvement in the subject and have dealt with a lot of finesse.

– L. D. L : We have turned Orneta three hours from Warsaw, for two months, six days a week, with work days of twelve hours. We rehearsed for ten days before the shooting, it has allowed us to meet, to dream about this story. There was no makeup, and I used the fatigue to embody Mathilde, it was beneficial to his journey.

Actresses Polish are monsters ! They dissect the scenario to master it completely, and not only the trajectory of their characters, but of all of them ! This was not really a problem don’t speak the same language, I think it has even helped to make the reports more real.

How do you feel about going to the Festival of Sundance, which has given as the title of the film AGNUS DEI ?

– A. F : In fact, Agnus Dei is the original title of the film, and then I changed it. But The Innocent in English, it was not good. It is very nice to go to the United States after Poland, especially as this is the first time that the festival selects a film that is subtitled in English.

– L. D. L : I’m going to play in the theatre, the Tales of Michel Ocelot, with the company’s March that I mounted with friends. I don’t have a cinema project, I have the luxury of being able to choose and to know for what reasons I do the next film.

• Scenario : Sabrina B. Karine and Alice Vial, adaptation and dialogues of Anne Fontaine and Pascal Bonitzer, based on an original idea of Philippe Maynial

Mathilde Beaulieu, a young internal of the Red Cross in charge of care for the rescued French before their repatriation, is called to the rescue by a Polish religious.

Initially reluctant, Mathilde is willing to follow in her convent, where thirty Benedictine living cut off from the world. She discovers that several of them, who became pregnant in dramatic circumstances, are on the point of giving birth…
TRAILER