This is the second article part of the series who is interested in crowdfunding, here you will find trails for the success of your campaign. Good read ?

To read the first article here

During the beginning of the year 2016, I have had the opportunity to set up my own crowdfunding campaign for a personal project: Paris Parallel. With friends, we had the ambition to make a video of 5 minutes, between fiction and documentary. To do this we needed a minimum budget. Being in charge of the production side, I proposed to go through the platform Ulule to raise the necessary funds to the implementation of our project. Our goal is to share this video on the Internet, we had no ambition of remuneration that is personal regarding the release of the video. I then thought that we could offer small rewards in exchange for donations. It worked because in a month and a half we had collected 2405 Euros, with the initial target of 2300 Euros. After deducting the 8% commission of Ulule (percentage declining after a certain threshold), we received 2213 Euros and, according to my estimate, we’d need a minimum of 2000 Euros to produce our video without having to finance it personally.

So I’m going to expose you here are a few tips that I have used in the preparation of our campaign, as well as during its progress.

A campaign is preparing thoroughly, you must be sure to know how to present your project to the internet users.

It is in the first place create a visual to accompany the project, and use it as an illustration of submission.

Then, it is necessary to show what is in the project, provide a draft synopsis for the outline. It is also good to talk about his intentions : Why this project ? What is the purpose ? Who is he ? How to achieve it ? Discuss the artistic choices…

For this, it is recommended to make a “mood board ” or a video presentation, describing the project as a whole. The images are vivid, they have an impact much stronger than a text.

Then comes the presentation of the team, the initiators of the project, but also all those who are in attendance. It is important that the public becomes aware of people he supports and finances.

The goal is to push the future contributors to contribute substantially. It is best to be transparent in terms of the financial aspect. For this, it is necessary to explain why the creators have need of this money, how the funds raised will be spent, all of this with a lot of description, in order to create a spirit of ” big family “.

The budget must be realistic and proportional to the community that the creators think being able to federate around the project.

It is important not to forget the promise of rewards made to donors, which represents a cost.

Nothing should be left to chance. It is necessary to carefully consider the rewards that will be “offered” and from which amount the contributors have the right to such or such a ” gift “.

They must be original, creative, exclusive, generous, and proportionate to the commitment of the contributor.

The rewards are not only a way to attract contributions, but also and especially of the increase. In fact, if the contributor was thought to give 25 Euros, but the consideration to be 35 Euros is more interesting, it will be attempted to increase its budget.

4 – The duration of the campaign

You should know that this is not because the campaign will be longer than the target of 100% will be achieved. In fact, most projects are long-the more potential contributors will say that they have time to give, the risk being that they never come back. The purpose of a campaign is to keep a steady pace in order to ban, or at least reduce, the effects of procrastination. 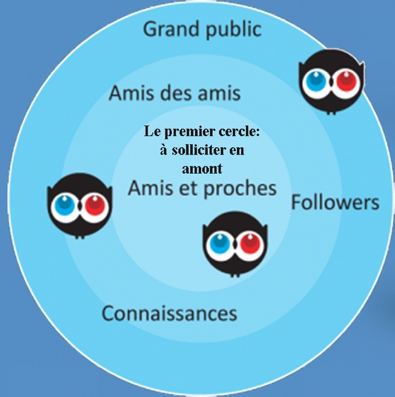 In the first place it is necessary to communicate at the maximum of his entourage a few weeks before the launch of the campaign.

Then, a few days after launching it, ask him to communicate with his own entourage.

And finally, in parallel, it is necessary to communicate on social networks.

It is crucial to communicate well in advance of the campaign on the project. It will be nearly impossible to succeed in crowdfunding if the creators have not started to create their community. For this, he should not hesitate to use all tools of communication today, especially social networks.

During the campaign it is necessary to communicate regularly. On all platforms it is possible to create ” news ” addressed directly to the contributors who help to talk about the project. Then the social networks will be the best friends of the creators to attract new ones. 90% of funding comes from these sites, such as Facebook (50% of the access on Ulule is done by this site). The mainstream media are of little interest for this kind of approach. In fact, they especially cater to the general public, it is difficult to convince as it does not know the creators of the project.

It is not necessary that the contributors feel abandoned once the goal is achieved. This is why it is important to keep them informed of the progress of the project, the actions taken, the dispatch of rewards… They will be the best relay for communication on the project. This can be done via social networking, the tab news of the page or just via email.

In the next article we will take a look at the limits of crowdfunding.

Have you ever done a crowdfunding campaign ? How this happened ? Please do not hesitate to share your experience in the comment.