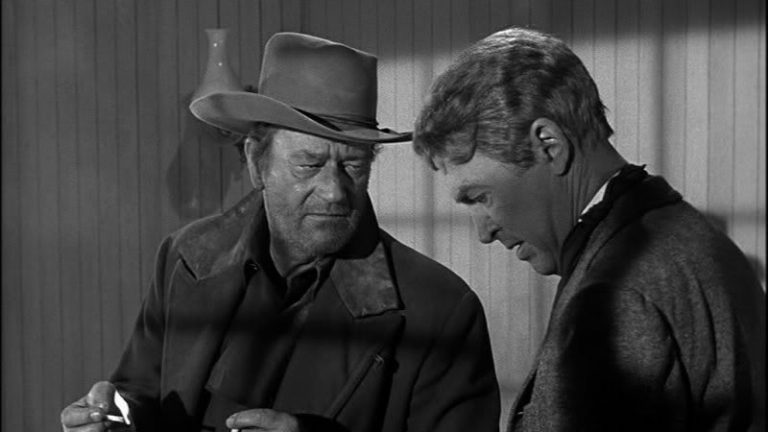 The program tonight : Nothing on the TNT and The Man who shot Liberty Valance on Action.

The MAN WHO shot LIBERTY VALANCE

Screenplay : James Warner Bellah and Willis Goldbeck based on the story by Dorothy M. Johnson

In 1910, senator Stoddard and his wife Alice, an elderly couple, returning to Shinbone, in the West, for the funeral of Tom Doniphon. The local reporter, intrigued by the presence of a senator come to attend the funeral of a cowboy unknown, press Stoddard to explain. Stoddard, initially reluctant, eventually agreed. It evokes the era in which freshly graduated in law, he landed with the ideal to bring legality in the West.

Shortly before his arrival in Shinbone, the diligence is attacked by a band of outlaws. Stoddard is robbed and beaten by their leader, leaving him for dead. Tom Doniphon finds it, he learns the name of his attacker : Liberty Valance, a bandit is a matter of public notoriety, and deposits it in the restaurant of the young Alice (his secret love) and his parents. Stoddard, still weak, speaks of to make it stop Valance, which causes the sarcasms of Doniphon : Shinbone, it is the rule of the gun prevails. Stoddard does not get more support from the sheriff, coward noticeable.

In exchange for his work at the restaurant, it is housed by Alice. When Valance the causes, it is Doniphon helped Pompey who advocate it, thus demonstrating that only the gun can protect a man. Stoddard refuses yet to abandon the legal way. He teaches reading and writing, gives the rudiments of civic education to children and is training secretly to the revolver. Stoddard became the friend of Peabody’s, the journalist of Shinbone, which denounces the will of the big owners of cattle to keep the Colorado course is open, which prevents the development of the city. The big owners have more committed Liberty Valance, who did not hesitate to attack the farmers isolated to serve their interests. The solution would be the admission of Colorado into the Union and, in fact, the election of representatives to the Convention will take place. On the day of the election, Doniphon refuses to be a candidate and, despite the attempts of intimidation of Valance, Peabody and Stoddard, who were elected at the expense of the Valance. The latter, furious, sum Stoddard to leave the town or face him in a duel the same evening.

Peabody, who comes from write an article on the defeat of Valance, is whipped harshly by the bandit, but not without having defended valiantly and verbally) the freedom of the press. Stoddard, for whom this is too much, refuses to leave the city as all the involved. He takes his gun and goes out into the street to wait for Valance. This last spell and, after a shot of intimidation, injures Stoddard in the arm. Stoddard picks up the weapon of the left hand while Valance puts it in play. The two men pulling at the same time, and Valance collapses, dead. Stoddard returns to Alice, who cares. Doniphon, saw the scene, thought to have lost Alice, and burns the house that he built for the wedding.

Peabody and Stoddard will go to the convention where the man who killed Liberty Valance is seen as a hero. Peabody proposes as a candidate to represent the party pro-Union at Washington, but Stoddard in disgust, preparing to return in the east. Doniphon stops him then, revealing that, in reality, it is he himself who has pulled over on Valance and killed him at the time of the exchange of gunfire. Stoddard returns to be elected.

Arrived at the end of this story, the journalists who listen to him ultimately decide not to make it seem the article. The true story of Tom Doniphon will remain hidden for ever in order to preserve the caption : “in the West, here. When the legend exceeds the reality, then we publish the legend ” (This is the West, sir. When the legend becomes fact, print the legend).

While the couple leaves the small town to return to Washington, an employee of the train announces that he just has to arrange the matches specially for them : “Nothing is too good for the man who killed Liberty Valance ! “.

The man who shot Liberty Valance was the last western John Ford. It has, according to Jacques Lourcelles, value of a will of the author in this area. This is why the film is bathed in a melancholy, even bitterness, enhanced by the static character of the action. The film, highly symbolic, presents a unique scenario and the complex is conducive to analysis. We give here some salient elements.

• National Film Preservation Board in 2007