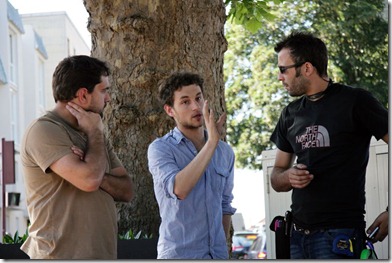 Here is the second part of the record of my shooting ! It has been two weeks that I’ve completed, and after having slept for twenty hours straight, I’m more motivated than ever to complete the post-production and especially the increasing power of the blog !

Statement of the facts

The filming was a big test for me, I had not specifically passed my first short. Of course, I learned a lot of things, but I’ve never been able to get completely what I wanted.

As I have already said, this short was special to me. The scenario was much more neat than the other, and I was preparing for his filming for about three years. Things have really accelerated over the last six months.

I had a budget around 3000€ in cash, not counting the loans in nature.

My team was a mixture of quite heterogeneous. Between experienced professionals, young professionals, students from finishing their last years (Eicar) and young people not having a background in theater but is being trained on the job.

The cocktail worked fairly well. The professionalism of the team has been something that has helped me a lot and I don’t know necessarily. The people were there to work, of course in a fun and déconnant from time to time, but their effectiveness was and remained present.

In addition, my authority director was nice and well respected. Even the technicians of over thirty years who had the bottle not allowed, nor question my choice or impose their visions. Something very significant because it is an element that can prove to be extremely destabilizing for a director.

Unlike my previous short, I had no friends on the set. Also in attendance were people I did not know and who did not know each other, not necessarily between them. This has saved me from falling into the trap of shooting among friends. Pitfalls that are common during the first filming, and that he should try to avoid it in the future. Because your shooting can lose rigor and the hierarchy will not be respected.

It is also for this reason that I encourage you during your first few shoots not to ask only your friends to help you.

My chief operator and the whole team image me tremendously impressed. I felt calm because I realized that they knew what they were doing. This is a big relief for a young director than to know that one of the areas of his film is in skilled hands and qualified.

I am quite satisfied of my performance of the director on the shoot. I think this is due to three things :

The only small downside to note is the management of stress and fatigue. I’ve sometimes reaches moments of anxiety quite important even if it is still lower than my previous shoots. I’m on the right track.

I was lacking the needed organization to this level, and most of the time, I improvised on the moment. At this level, it would have been good to have someone who takes care of the production to manage the logistics. I would have had the spirit more free and my mise-en-scene would have been better.

The word of the end

In conclusion, there is a truth that is confirmed on the shoot :

The team that you have you is a key fundamental to shooting success. We need to make a good choice of collaborators before the shoot and on the other hand find the handle on the shoot (at different levels but I would go back in a next article)

So, this is the end for this second part of this making-of writing. As soon as I have completed my post-production, I will make you an account ;).

If you want me to deepen a point, please don’t hesitate to ask in the comments.