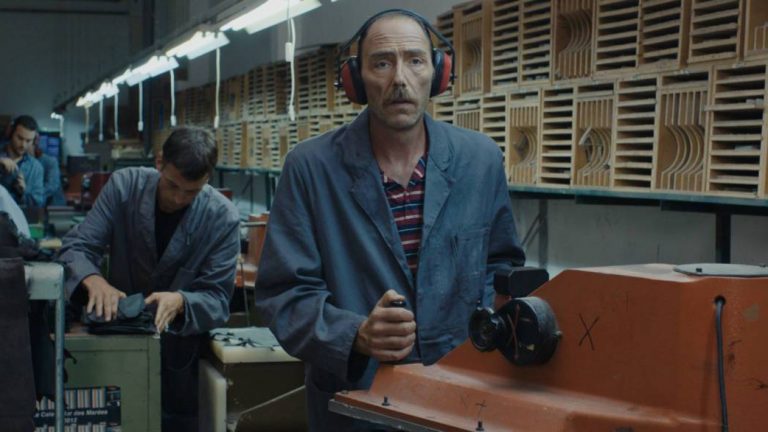 For his first feature film, WIND OF the NORTH, Walid Mattar brings to the stage the difficulties of two workers who work on the same machine in two different countries.

We love the three main actors Philippe Rebbot, Corinne Masiero and Kacey Mottet Klein. Then to see them form a family credible is already the first pleasure that comes with THE NORTH WIND. The second pleasure is that, from the outset, the director Walid Mattar immerses us in the normality of their life, and makes them sympathetic. These are modest people, no big ambitions. They are not big mouths, not jealous. Hervé is a worker for more than thirty years in a shoe factory.

The notion of a job well done is important to this man applied, meticulous and proud of what he accomplished. It is not unionized, is not interested more than that to the life of the plant. He loves to moan a little, his family, his friends and fishing. His wildest dream, for which it saves, is to buy a fishing boat. ll already has the tractor and lead it to the sea. Hervé, it is very fair, Philippe Rebbot, to which the director offers here a leading role finally. Véronique (Corinne Masiero) is a maid in a thalasso centre. The couple is united, even if they squabble sometimes about their son Vincent (Kacey Mottet Klein), glandeur like all young adults, who expects to leave the army.Nothing pejorative in this way of filming his characters humble at work, quite the contrary. There are indeed a lot of goodwill in the eyes of the filmmaker, but also in that of the co-writers, including Claude Pope, who worked on the scenario of the Small Farmer. Then the movie flips into the social drama, but lived from the point of view of Hervé. Walid Mattar draws the portrait of a worthy man who does not hullabaloo to the announcement of the relocation of the factory in Tunisia. It welcomes the news of his dismissal, does not complain, does not claim. He refuses to play collectively, as the reproach his friend, union delegate (Thierry Hancisse). We even saw a certain boldness on the part of the director, by the time that run to cleave to a man who does not feel concerned by this struggle.

Resigned, knowing that the fight is lost in advance, it will try to convert back and achieve her dream with enthusiasm, to be creative to get by. And compare, without ever rising to the administrative obstacles, the surrealists, in scenes reminiscent of those of the Law of The Market , and in view of the character of the workshops for the Job center. This part of the film is the most exciting, lived closer to this family who finds strength, without drama, to bounce back and whose bonds grow even.

“Ode to the working world and to these men who are trying not to sink, WIND in THE NORTH is still the risk, by this film, “two in one”, to frustrate the viewer deeply emphatic.”

But the director does not stop with just one story. It was deemed useful to tell different life experiences mirror that of Hervé, via the cutting machine he was using and the way of The Dachshund -this little dog changed its master. Delocalized in Tunisia, it is now Foued (Mohamed Amine Hamzaoui) who learns to use it. Therefore, the round-trips are going to be many between Hervé and Lakhoua, France, and Tunisia, as well as the routes of the trucks carrying the containers of the material and those of the boats on the Mediterranean.

Even if the basic idea seemed good, it has the effect of breaking the rhythm of the film. It deprives the viewer of the attachment felt towards Hervé and the completeness of its history. By deciding to deliver intermittently a few crumbs of his own destiny, it is like fishermen who appâte the fish, the fishery, but discarded. Because we confess not to have been sensitive to the fate of Foued, his loves, disappointed, to his concern to preserve his work, or his life in tunisia. And, even if one recognizes the leg of Leyla Bouzid, the other co-writer of THE NORTH WIND, and we had loved A sentence, I open my eyes, it is a pity that this part of tunisia post-Arab Spring was not as thorough and balanced as the French part.

Then of course, evoke the comparison of the world of work between the two continents share a good feeling, which is linked to the one mentioned in Take off, which délocalisait also working in Morocco. Similarly, the highlighting of common points between the two men is interesting and is reinforced by the numerous effects of mirror with which plays the director. First the sea, even if the first one is the North Sea and the second to the Mediterranean Sea. And then their satisfaction, the same to be able to control the gesture of cutting on the famous machine. But also their hopes disappointed, and their inability to share their feelings then they drink shots in bars with friends. As to their lonely fight in this wild world is so complex, it is beautifully highlighted thanks to the wide shots, showing off their silhouettes.

Ode to the working world and to these men who are trying, at all costs, not to sink, THE NORTH WIND takes yet the risk, by this film, “two in one”, to frustrate a bit the viewer deeply empathetic.